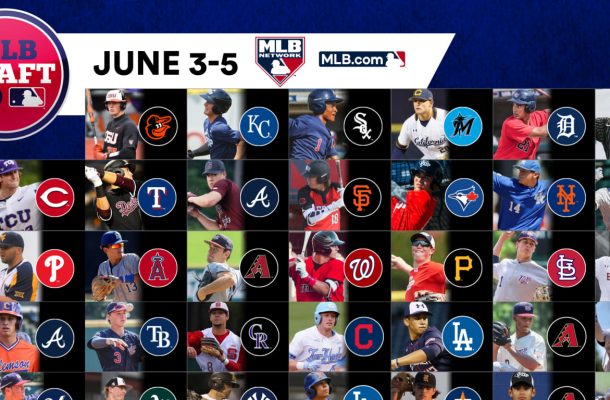 • 2019 Draft legacies 1 Orioles: Adley Rutschman, C, Oregon State There simply isn’t enough intel to make a switch just yet Rutschman is having an absolutely dominant junior season and is the top player on nearly every Draft board 2 Royals: Bobby Witt Jr, SS, Colleyville (Texas) Heritage HS The only reason to change this would be if the Orioles took Witt instead, leaving Kansas City its pick of the top college hitters should it choose to go in that direction 3 White Sox: CJ Abrams, SS, Blessed Trinity Catholic HS (Roswell, Ga) Assuming Rutschman and Witt go 1-2, this could end up being an internal debate between the toolsy, high-upside up-the-middle player in Abrams and the advanced college hitter in Vaughn 4

Marlins: Andrew Vaughn, 1B, California As Jim Callis pointed out in his mock last week , these next three could go in any order.

There are Vandy connections here, with Marlins scouting director DJ Svihlik having coached at the school last year, so it could easily be JJ Bleday, while Riley Greene would be the high school bat choice 5 Tigers: Riley Greene, OF, Hagerty HS (Oviedo, Fla) With Vaughn off the table, it’s Greene vs Bleday here The Tigers love Greene’s offensive upside and could let Bleday get to… 6 Padres: JJ Bleday, OF, Vanderbilt … San Diego Bleday’s power is legit If the Padres want to go in another direction, this seems to be the first place Juco right-hander Jackson Rutledge could go 7 Reds: Nick Lodolo, LHP, Texas Christian The Reds might do cartwheels if any of those bats got to them, especially Vaughn But in this scenario, we’re sticking with TCU lefty Lodolo, the top college arm in the class 8 Rangers: Hunter Bishop, OF, Arizona State This could be another landing spot for Rutledge and there is this nagging feeling that the Rangers like high school guys, but Bishop has tools with the chance to hit for power and play center field 9 Braves: Jackson Rutledge, RHP, San Jacinto (Texas) JC (Compensation for failure to sign 2018 first-rounder Carter Stewart) This is really where the projections start heading off in many directions Rutledge’s stuff and upside make him belong in this neck of the woods There are also college bats like UNLV shortstop Bryson Stott and Baylor catcher Shea Langeliers in the mix

Giants: Bryson Stott, SS, Nevada-Las Vegas Stott is having a huge year at UNLV, hitting for average while reaching double digits in home runs and stolen bases, all while walking more often than he’s struck out And he has at least a chance to stick at short 11 Blue Jays: Corbin Carroll, OF, Lakeside HS (Seattle) Carroll, one of the better high school hitters in this class who also has plus speed, has not had his name mentioned up this high previously Toronto might be hoping one of the top 10 above gets to it, but if not, it could be open season and there are those in the scouting department who love Carroll’s bat and athleticism 12 Mets: Zack Thompson, LHP, Kentucky In many ways, Thompson has been the best performing college pitcher in this class, but the lingering medical concerns remain a question mark He could go ahead of this pick if a team’s medical staff signs off on him 13 Twins: Shea Langeliers, C, Baylor The Twins like Carroll, but with him off the board, they could set their sights on Langeliers, a terrific defensive catcher who has shaken off a hamate injury to come on with the bat of late this spring He also homered to open up the Big 12 tournament 14 Phillies: Alek Manoah, RHP, West Virginia The Phillies could be in on any of the top college arms should they get here, including Thompson and Elon’s George Kirby A high school bat like Brett Baty or Gunnar Henderson could also enter the conversation And don’t rule out a prep pitcher like Matthew Allan 15

D-backs: Matthew Allan, RHP, Seminole HS (Sanford, Fla) Allan is the top high school pitcher in the class and realistically could land in the top 10-15 picks There also could be a high price tag, which could scare off some teams

The D-backs, thanks to all of the extra early picks, conceivably have a large enough bonus pool to get something done.

Nationals: Josh Jung, 3B, Texas Tech There’s been a lot of talk about arms here, but there might not be one the Nats like enough to snag at No 17 Jung has been solid and has a track record of hitting and on-base skills Like with Langeliers, his 3-for-3 performance to start his Big 12 tournament doesn’t hurt 18 Pirates: Brett Baty, 3B, Lake Travis HS (Austin, Texas) Yes, Baty is old for his class at 19 1/2 But if he were to go on to Texas and be a Draft-eligible sophomore in two years, no one would be saying anything about his age And he can flat out hit 19 Cardinals: Quinn Priester, RHP, Cary-Grove HS (Cary, Ill) Athletic and projectable, Priester comes in not far behind Allan on the high school arm list The Cardinals have gone with a high schooler with their first pick in each of the last three Drafts 20 Mariners: George Kirby, RHP, Elon Kirby has put up some ridiculous numbers at Elon, with a 207 ERA and an obscene 105/6 K/BB ratio Teams looking for a college arm above could take him and the Mariners, who are likely looking for pitching here, could turn their sights to Seth Johnson at Campbell or high schooler JJ Goss 21 Braves: Logan Davidson, SS, Clemson Let the run on shortstops commence! Davidson might be the best of the bunch with his power-speed potential and his ability to stay at the position 22 Rays: Gunnar Henderson, SS, Morgan Academy (Selma, Ala) The Alabama prepster’s name has been moving up boards all spring, and he could realistically end up going in the teens The Rays certainly don’t shy away from taking high schoolers in the first round 23 Rockies: Will Wilson, SS, North Carolina State The buzz is still all about college bats in this spot and they could have interest in guys like Davidson or North Carolina’s Michael Busch here Wilson can hit for average and power and would profile well, even if he has to move to second base 24 Indians: Michael Busch, 1B/OF, North Carolina Speaking of college bats, that seems like a strong possibility here as well A high school arm like Daniel Espino has been brought up if the Indians decide they don’t like any of the offensive possibilities 25 Dodgers: Daniel Espino, RHP, Georgia Premier Academy (Statesboro, Ga) With two picks in the round, the Dodgers could divvy things up in a couple of different ways A prep arm here, with the best fastball in the high school class, followed by a college bat, could be one iteration 26 D-backs: Brennan Malone, RHP, IMG Academy (Bradenton, Fla) (Compensation for failure to sign 2018 first-rounder Matt McLain) Malone is projectable and athletic and started to show a better ability to pitch (and not just throw) this spring There’s a ton of upside here

Cubs: Kody Hoese, 3B, Tulane Hoese continues to put up some of the best numbers of any hitter in Division I, with a 388/484/790 line with 23 homers and 60 RBIs, not to mention more walks than strikeouts And it’s been well-documented how well the Cubs have done with college bat draftees 28 Brewers: Tyler Callihan, 3B, Providence HS (Jacksonville, Fla) The Brewers would love for an arm like Malone to get here, and they could look at another prep arm like Goss But if Malone is off the board, they would have interest in Callihan, one of the better high school hitters in the class 29 Athletics: Seth Johnson, RHP, Campbell Johnson has premium, early-round stuff, but doesn’t have a long resume of pitching That leaves some things unknown about him, but also means he’s a rare college pitcher with a lot of ceiling 30 Yankees: Kameron Misner, OF, Missouri It’s true Misner has struggled, especially in conference play But his tools are hard to ignore, with the chance to show off a power-speed combination once he gets to the pro level 31 Dodgers: Brady McConnell, SS, Florida (Compensation for failure to sign 2018 first-rounder JT Ginn) McConnell’s name has been sneaking into the back end of the first round conversations of late thanks to a very strong season with the bat The athletic shortstop has been a bright spot for an otherwise disappointing season for the Gators

Astros: JJ Goss, RHP, Cypress (Texas) Ranch HS With Espino and Malone off the board, Goss is the next best high school arm, with plenty of projection as he adds strength to his 6-foot-3 frame 33 D-backs: Matthew Lugo, SS, Carlos Beltran Baseball Academy (Florida, P

) (Compensation for loss of free agent Patrick Corbin) Carlos Beltran’s nephew has some excellent offensive ability, with the chance to hit for average and solid power Whether he sticks at shortstop remains to be seen, but his bat could profile at second or even third 34 D-backs: Maurice Hampton, OF, Memphis (Tenn) University HS (Compensation for loss of free agent AJ Pollock) Hampton is the best two-sport star in the class, and could go on to play football and baseball at LSU if the Draft doesn’t work out The D-backs could take advantage of the extra picks to keep him off the gridiron is a reporter for MLBPipelinecom Follow him on Twitter @JonathanMayo and Facebook , and listen to him on the weekly Pipeline Podcast