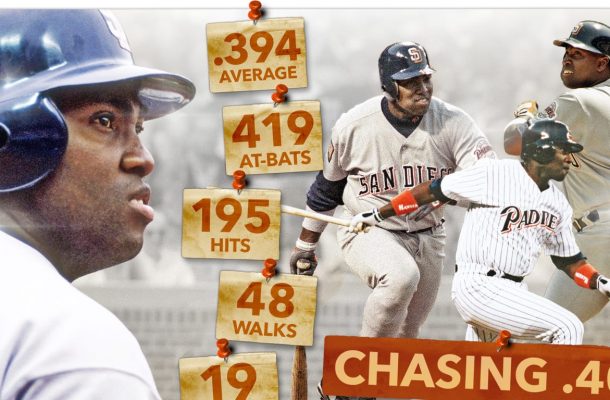 "Of any star I'd ever seen," recalls longtime Padres broadcaster Ted Leitner, "he was the most accessible He was closest to the fans" Gwynn played baseball and basketball at San Diego State University, where he remains the school’s all-time assists leader He was selected by the Padres in the third round of the 1981 Draft and led San Diego to its first National League pennant three years later All the while, Gwynn racked up numbers that defy belief Nineteen straight seasons batting above 300 Seven seasons at 350 or better

302 batting average with two strikes More four-hit games than two-strikeout games “Nobody,” says longtime right-hander Orel Hershiser, “was like Tony Gwynn” As Gwynn racked up numbers, he also earned the love of a city A statue of Gwynn, mid-swing, adorns the park area beyond the outfield at Petco Park When Gwynn was inducted into the Hall of Fame alongside Cal Ripken in 2007, San Diegans made the cross-country trek to Cooperstown

When Gwynn passed away of salivary gland cancer in 2014, the entire city mourned Nearly 30,000 people attended his Petco Park memorial service Gwynn wasn’t always predestined to remain with the Padres He’d signed a contract extension in 1991, but things changed significantly from ’91 to ’94 in San Diego Padres ownership infamously unloaded superstars like Fred McGriff and Gary Sheffield -- within a month of each other in 1993 -- in what’s known as “the fire sale” In the winter following the 1993 season, Gwynn had two years remaining on his deal, and the Padres’ future wasn’t bright A stroke of his pen changed that Gwynn would remain in San Diego through '98 at $4 million per season “The San Diego discount,” Leitner says “He knew he could've gone out, got the money, but he just didn’t want to” That laid the foundation for arguably the greatest era in Padres history In the following months, general manager Randy Smith added key cogs like Ken Caminiti and Steve Finley He’d also recently acquired Trevor Hoffman “Tony committing to the club at that moment was so huge to help us going forward,” Smith says “What he did in ’94 meant so much to the city But what Tony did, it also made it easier for me to say to ownership, ‘Hey, let’s go make these trades, let’s go put ourselves in a position to do something

’” In the four seasons following the ’94 campaign, the Padres won two division titles and one NL pennant.

Gwynn’s faith had been rewarded Chapter 2: ‘They’re going to hit me’ April 24, 1994: Jack Murphy StadiumPadres 6, Phillies 51st: Hit by pitch (by Curt Schilling)3rd: Single to CF (off Schilling)4th: Single to LF (off Schilling)6th: Ground ball double play (against Jeff Juden)8th: Single to RF (off Doug Jones)Batting average: 448 Gwynn’s greatness didn’t rub anyone the wrong way He was simply too genuine But sometimes, his greatness was too much to comprehend On April 23 against the Phillies, Gwynn went 5-for-5 with a double and a home run For anyone else, it’d be a career night For Gwynn, it was one of nine five-hit games During home games in the early ‘90s, Gwynn’s wife, Alicia, brought their son, Tony Jr, to the ballpark, where he’d watch the game, then join his father in the clubhouse afterward The two almost always drove home together Following his five-hit game against Philadelphia, the elder Gwynn offered a prediction during that car ride home It confused the 11-year-old Tony Jr “They’re going to hit me tomorrow,” he said Gwynn explained that the Phillies thought he was stealing signs By all accounts, he was doing no such thing Five hits in five at-bats wasn’t out of the ordinary for Tony Gwynn, after all The next day, Schilling was on the mound for Philadelphia The first pitch he threw to Gwynn was a fastball at his right knee Gwynn -- whose infectious laugh was a defining characteristic -- took on a different persona for a moment “He got up and he jawed at Schilling the whole way to first base,” Gwynn Jr recalls “That was something my dad never did The very next at-bat, he hit [singled] just right up the middle” It was a good old-fashioned base hit An inning later, he singled to the opposite field against Schilling as the Padres poured it on early It exemplified the way Gwynn could do things with a bat that few other hitters could do “Sometimes it felt like he had a steering wheel on his bat, and he could put the ball exactly where he wanted,” says Hershiser, who faced Gwynn in 11 plate appearances in 1994, as many as any other pitcher (and “held” him to a 625 average in the process) Following Gwynn’s single off Schilling in the third, he put his head down and ran to first base But, according to Gwynn Jr, he did so with more than a touch of satisfaction “That was the tone-setter for the rest of the season,” Gwynn Jr recalls Chapter 3: Chasing 400 May 16, 1994: Wrigley FieldCubs 4, Padres 21st: Groundout to second base (against Anthony Young)4th: Bunt popout to pitcher (off Young)7th: Groundout to 1B (off Young)9th: Walk (against Randy Myers)Batting average: 398 Four hits every 10 at-bats; a minimum of 31 plate appearances every team game When Gwynn bounced to first base in the seventh inning on May 16, it was the last time his season average sat above 400 He’d spend the next three months attacking that number like no modern-day hitter had ever done Nearly 20,000 people have played Major League Baseball Twenty of them hit 400 That ratio is dwindling by the day Five accomplished the feat more than once Rogers Hornsby, Ty Cobb and Ed Delahanty did so three times Every one of those seasons took place before color television

“I had never been involved with anyone hitting at that level, but you realize how hard it is to hit .

400 right away,” says Merv Rettenmund, the Padres' hitting coach in 1994 “He'd be at 395 or something, he'd go 2-for-4 with two hard-hit lineouts, and the batting average wouldn't go anywhere” Jim Riggleman, the Padres' manager in 1994, puts it another way: “Do you know how hot you’ve got to be to bring your average up 24 points when you’re hitting 370?” Since Gwynn’s quest in 1994, no player has eclipsed 380 (Coincidentally, Paul O’Neill of the Yankees carried a 400 average through June 16 of that season, a full month longer than Gwynn, but finished with an AL-leading 359) As league-wide batting averages have fallen, so have the averages of batting champs Larry Walker hit 379 in ’99 Ichiro Suzuki batted 372 five years later But since the start of 2011, the highest single-season average is

383 There’s no moment that captures the essence of Tony Gwynn better than the 1994 All-Star Game in Pittsburgh It was Gwynn’s 10th career midsummer classic, an event that he cherished dearly “He wasn’t in the playoffs every year, so that was the ultimate to him,” Leitner says Gwynn had been on the losing end of five consecutive All-Star Games with the NL That didn’t sit well with him, and he was the only National Leaguer to play all 10 innings that night, going 2-for-5, which equates to a 400 average (naturally) He led off the 10th with a single Moises Alou followed with a double to the gap, and Gwynn decided to win the game right there, speeding around the bases Albert Belle fielded and threw to Cal Ripken, who relayed to Ivan Rodriguez The throw was on the money Gwynn slid safely under the tag He waited for the call from home-plate ump Paul Runge Then, in a moment of pure, unbridled joy, Gwynn leapt He pumped his left fist, and he leapt again, springing off the stadium’s AstroTurf Never mind that the game was merely an exhibition Never mind that Gwynn’s two hits wouldn’t help his quest for 400 Gwynn had helped win a baseball game, and by God, he was going to celebrate “He just played the game hard,” says Hoffman “Whether it was an exhibition, regular season or postseason game He just loved playing

” That moment sparked a surge.

Gwynn came out firing to begin the second half He went 18-for-38 during the first week, including six hits during a doubleheader in Philly That raised his average to 393

The chase was on.

“Four hard-hit balls a day,” Riggleman says “It was just a matter of: 'Do they go in a hole or do they get caught?' He was phenomenal It was left-handed pitchers, right-handed pitchers, left-handed sidearmers, velocity, sliders He was just on everything” “It was amazing,” says Hoffman, who arrived in time to watch Gwynn hit 400 in the second half of ‘93 “There was no doubt in my mind he had the ability, and was probably going to get it done Because I saw him do it every day -- he was a 400 hitter” After the All-Star break in 1994, Gwynn batted 423 He hit 475 in August Says Riggleman: “I think he clearly would have gone up another six, or eight, or 10 points with the direction he was going Then? Nobody will ever know if he could maintain it But it was just phenomenal It was an honor to be around” Chapter 7: 394