Despite the success of Giannis Antetokounmpo in the regular season, the Milwaukee Bucks once again did not look as good in the playoffs.

When opponents have additional time and consecutive games to plan how to defend the reigning MVP, the eye-test suggests that the Milwaukee superstar suddenly looks far more human during the postseason. His numbers and statistical output still look fairly consistent when comparing the regular season to the playoffs. But there are still some glaring holes that the front office will need to adjust for the team to avoid similar issues next season.

For example, Kevin O’Connor recently lamented the lack of opportunities that the Bucks have given Antetokounmpo in the pick-and-roll (via The Ringer):

“The pick-and-roll has been a missing piece of Giannis’s game throughout his career. Giannis scored a dominant 1.4 points per roll to the rim over the past two seasons, per Synergy Sports, but he’s logged only 156 plays in those 135 games. By comparison, this season alone, Domantas Sabonis had 211, Rudy Gobert had 207, and Bam Adebayo had 161. All of those bigs have guards capable of creating efficient shots for them out of the ball screen. Giannis doesn’t.”

This is an incredibly fair observation considering that Antetokounmpo actually finished possessions as the ballhandler in the pick-and-roll (137) more often than he did when rolling to the basket (71) in 2018-19.

Even though Milwaukee’s superstar has above-average on-ball skills for his size, there is some questionable logic in the distribution of that output simply considering how much of a force he is to be reckoned with near the rim.

While they had the best record among all teams in the regular season, adding more advanced playmaking in the backcourt would assuredly help them last longer into the postseason moving forward. Expect this to be a major agenda for the organization this offseason.

O’Connor mentioned New Orleans’ Jrue Holiday and Oklahoma City’s Chris Paul as two potential trade targets for the Bucks. But both of those players come with heavy price tags that the organization likely does not have enough assets for in a trade.

But the front office does have the No. 24 overall pick in the 2020 NBA Draft, a viable first-round selection secured from the Indiana Pacers during the 2019 offseason via the sign-and-trade for Malcolm Brogdon.

Then in his recent mock draft, Sam Vecenie echoed this sentiment (via The Athletic):

“I also think the point guard position makes a lot of sense to target. Milwaukee will know if this is the case again before the draft, but if Bledsoe struggles again in the playoffs, the team is going to have to try to find a different option in the backcourt. And even if he doesn’t, it would make some real sense to target a backup at the position anyway given George Hill’s age and the fact that Donte DiVincenzo profiles best off of the ball.”

If they chose to find a guard to complement Antetokounmpo, the best prospect would be an NBA-ready distributor in the pick-and-roll.

So for this exercise, we examined the most prolific passers pick-and-roll passers available in the upcoming draft. Our methodology was to sort derived offense of P&R ball handler passes to the roll man by scoring on these possessions in their most recent season.

We adjusted for the rapid pace of Milwaukee’s offense, which helped to neutralize the international players and the college players and also account for the faster speed of the NBA.

It is incredibly unlikely that Milwaukee trades up to select Ball in the 2020 NBA Draft. However, there are several other guards who could help make an impact on the pick-and-roll scoring for Antetokounmpo moving forward.

Other candidates that could be more realistic trade targets include Tyrese Haliburton and Killian Hayes. If either begins to slip, it would be wise for the Bucks to potentially to try to trade up to secure

But the player who makes the most sense in their draft range is San Diego State Aztecs guard Malachi Flynn, who led the nation in win shares (7.4) last season.

Vecenie has Flynn’s range “anywhere from No. 25 to 45” and Bleacher Report’s Jonathan Wasserman pegged him between 31 and 45. This is also aligned with where he ranked on our most recent aggregate mock draft, falling at No. 33. It also means he should be right in the range of when the Bucks are on the clock.

It would be unreasonable to expect that he is their immediate, plug-and-play option. But considering he is polished and already 22 years old, he is further along in his development process than many other potential first-rounders in this class.

He was especially impressive when playing against top-100 competition as a junior for the Aztecs. His box plus-minus in those appearances ranked as the best in the NCAA.

When including passes, the guard averaged 1.16 points per possession as the ball handler in pick-and-roll sets. This ranked in the 96th percentile among all D-I college basketball players, per Synergy, and the best for high-volume players.

Zach Milner describes Flynn as “one of the best” pick and roll players in this class because he “can make a wide variety of passes (via The Stepien):

“One of the best PnR passers in this class and has very few flaws. Able to make a wide variety of passes and does a great job reading the floor. The passes that he is able to make include: pocket passes, crosscourt skip passes going right or left, perfectly timed passes over the top to the roll man, baseline passes with either his left or right hand, and sometimes dump-offs. He has even shown a few live dribble bounce passes with his left to the roller. He has a really nice touch on his passes when throwing it over the top to his roll man and puts it out of the defender’s reach.”

Not only was he efficient but he was also one of the most prolific creators among pick-and-roll distributors to the roll man as well. Below are his pick-and-roll possessions in 2019-20 to get a better sense to show how often he is able to run these plays. 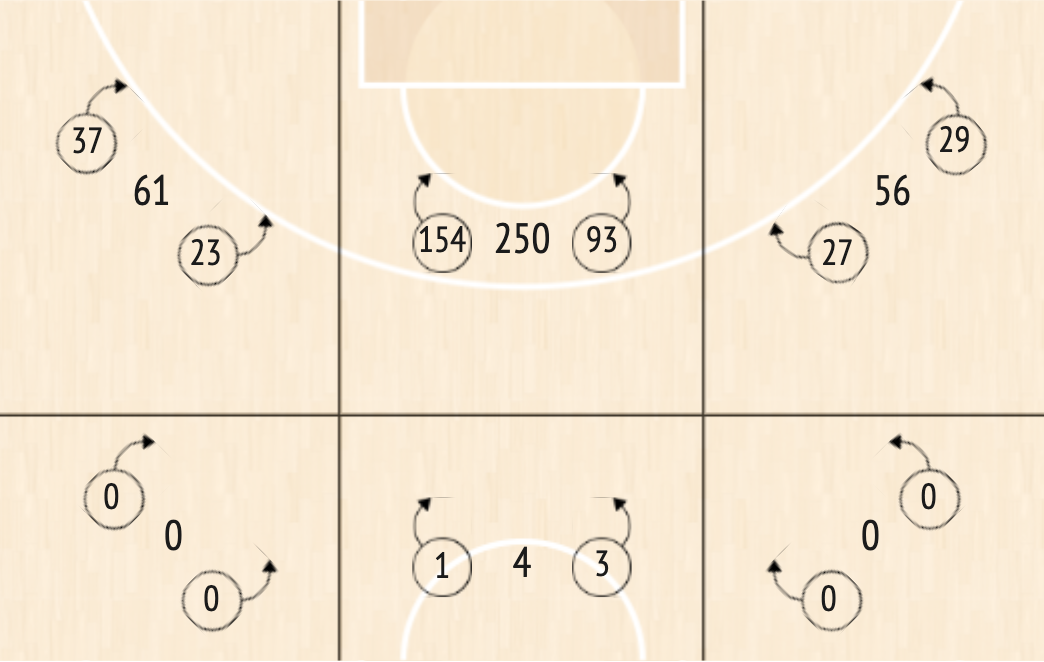 Teammates scored 95 points when rolling to the basket after passes from Flynn. This led all draft-eligible prospects, trailing just a few seniors — all of whom (Jonah Radebaugh, Zavier Simpson, TJ Haws, Jermaine Marrow and Markell Johnson) have already signed professional contracts overseas.

While there are other seniors (e.g. Cassius Winston and Grant Riller) who fit a similar profile of willing pick-and-roll passers, the Bucks should have a lot of interest in Flynn even if it means selecting him early than expected.

He may not be the most conventional pick as he is an upperclassman from a mid-major program. But he would be the best overall player to help take them over the hump when it comes to recent playoff woes.