Gary Clark, a 3-and-D forward who just signed a two-year deal with the Orlando Magic, says he is ready to play a role in their rotation.

The 26-year-old caught up with HoopsHype to discuss his ability to shoot from beyond the arc and his willingness to guard the best player on opposing teams. He also touched on working out with TJ Warren and his experience playing in the postseason during the NBA’s bubble location at ESPN Wide World of Sport in Florida.

Please note this interview was very minorly edited for brevity and clarity.

First and foremost, you just signed with the Orlando Magic. What are you going to bring to your team?

Gary Clark: I am a very reliable guy, in any aspect. I’m a guy that you can count on. People don’t realize how reliable I’ve been since college. I was one of the best plus-minus players in the country. Little kids see dunks and three-pointers and all of the stars. For me, my biggest thing is that I try to do all of the little things like getting steals and blocks and deflections. When I was in college, I broke the record in our deflection chart. I’m versatile on offense and on defense. I’m able to make shots and get into action without the ball. Whatever role my coach needs me to do, I’ll perfect it. I think that’s a hard thing for people to do. I can create more for myself other than just shooting three-pointers.

People see me just shooting three-pointers but that was just my role on both teams that I have been on in the NBA. I’m excited to show that I’m also able to get to the basket and can make pull-up jumpers off the dribble. After the games, look at the box plus-minus. I’m always near the top. I’m active on both ends of the floor. I impact the game in a winning way. You’re getting a young guy with a vet mind. I don’t complain. You can ask anyone with the Houston Rockets or the Orlando Magic. No one will have anything negative to say about me. The majority of what you will hear is positive. Maybe you will hear some jokes here and there. You’ll never have to question if I’ll be on time or that I’m doing the wrong thing. If I were a general manager or head coach, it would help me sleep knowing that I’ll never have to worry about Clark off the court. Then on the court, he is going to give me exactly what I expect out of him, every night.

Can you walk me through what this year has been like for you?

GC: Everything was really weird when the season was originally postponed and we all went home so unexpectedly. I was scrambling, finding somewhere to live in North Carolina, even though all of my things were still in Houston. Once I got settled, I was able to work out. I worked out with TJ Warren during that entire stretch. We went into the bubble and that gave me a clean slate to start fresh, which is why I was able to play so well. My first ten-day contract after leaving the Rockets, I was scrambling to figure things out what to do with my family and my place back in Houston.

After playing in the bubble, fairly well I’d say, it’s been interesting. I switched representation. Things have been going well. There are lots of cloudy aspects, too, but I’ve been working out. I’m trying to work on the things that I need to perfect, like being a knockdown shooter and being able to have an option when my defender runs me off the line so I don’t get a three-pointer. I want to add a few more aspects to my game while still remaining true to what I am, which is a 3-point shooter. Everyone wants to get better. My focus is perfecting what I do well and sticking with that.

During this season, you were cut by the Houston Rockets in January and then made it into the starting lineup for a playoff team with the Orlando Magic. Your first postseason start, you got 15 points and a win over the Milwaukee Bucks. What are you most proud of from your journey this year? 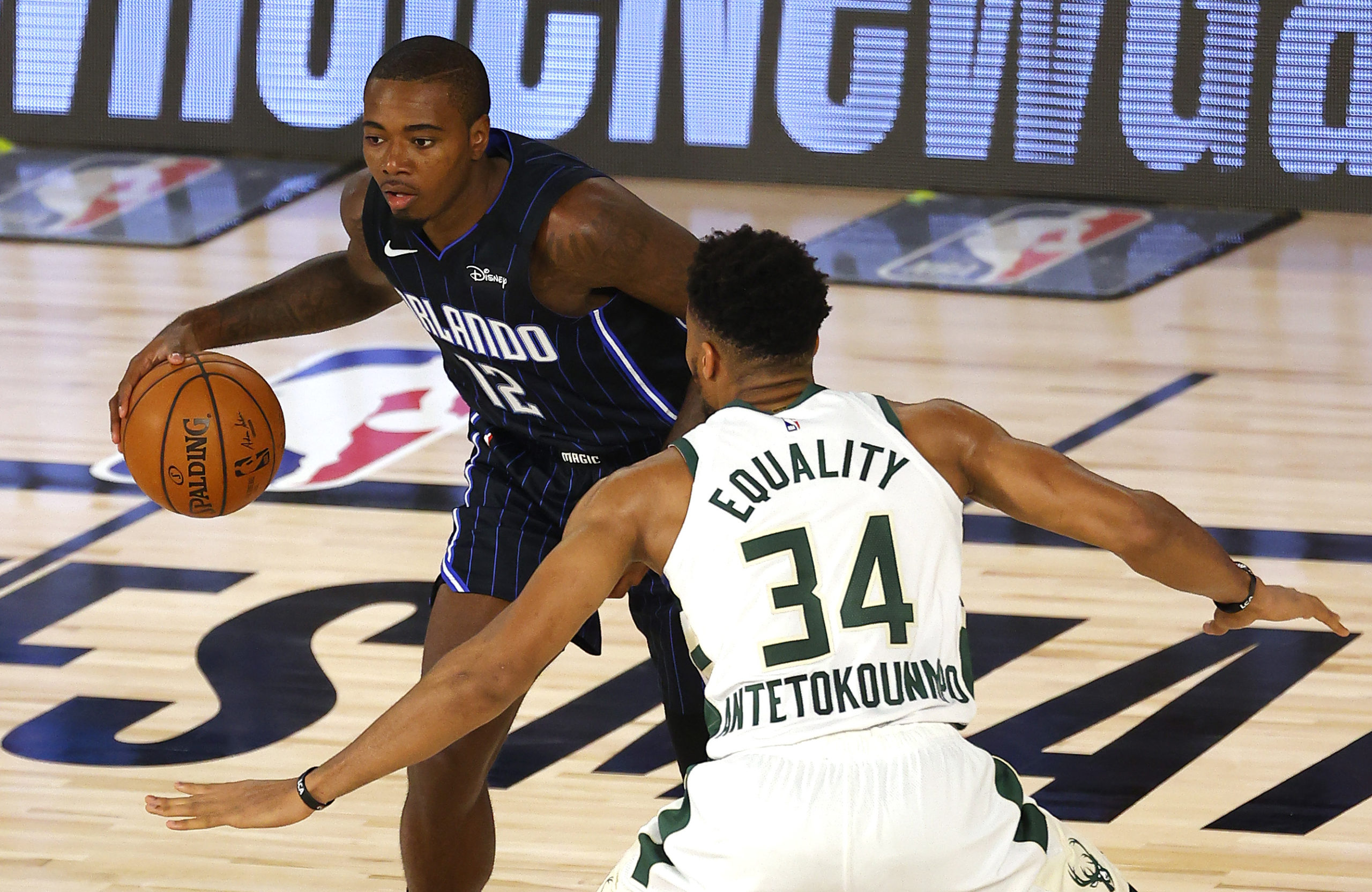 GC: I was working out so hard. TJ and I were getting after it. I was just so confident coming into the bubble. I was ready to play and then Jonathan Isaac was injured. He was starting in my position. But the whole time, I had kept myself prepared. I worked so hard. I weathered the storm. I always had the right mindset. When I was in Houston, because of the veterans, I did not get many opportunities. I stayed prepared. When I got my chance, I played well. I gained the trust of coach Steve Clifford because he knew I could step into that role and play good minutes. He told me that I didn’t give myself enough credit for my matchup guarding Giannis Antetokounmpo, the best player and the best defender in the league. But it wasn’t too big of a hassle even though it was my second year in the league. People have to look at that and realize that even though I’m a young guy, I made things difficult for the league’s best player.

I’d love to hear more about the workouts you and TJ Warren had before the season resumed. Both of you really exceeded expectations out there. What were some of those conversations and sessions like for you?

GC: We honestly spent so much time together. Before that, we knew each other. We had worked out together, we had played pickup. But really, our relationship grew so much during the hiatus because we were with each other every day in the gym. We weren’t getting food together. We weren’t hanging out at each other’s houses. We were legitimately in the gym all of the time. I got to know him more, he got to know me more. He is a veteran in the league but we are close in age. We played a lot of one-on-one and we guarded each other every day. I got to defend a really talented offensive player.

People look at me as a shooter, more than anything, but what people don’t know is that I was a two-time Defensive Player of the Year in my conference back when I played in college. Going against TJ, I learned so much about how to guard someone who can get to the basket but also shoot the three-pointer. I got so much better at defending that by the end, it wasn’t easy for him and he had to work for all of his baskets. Even after the bubble ended, he still calls me and asks if I want to run at the same gym that he does because he wants to go against me. If you ask TJ, he’ll tell you how good of a defender I am. I feel a lot more confident that I’ll be able to guard guys like Jimmy Butler or LeBron James moving forward.

You were part of some incredibly historic parts of this year, including being in the locker room when the Milwaukee Bucks boycotted Game 5 of the first-round series to protest police brutality. What are some of the sights and sounds and emotions that you will remember from this crazy year?

GC: The tragedy of Kobe Bryant passing away was huge for everyone in the basketball community. But at that time, my ten-day contract expired. I was signed to a second 10-day contract but during the few days in between is when Kobe had passed away. I was not able to be a part of the things that the league did to honor him, like running out the 24-second shot clock. I’m still simmering that I was out of the league when that happened. I never want to experience being out of the league again until I’m ready to retire. It worked out how it was supposed to work out. But those are the things that I think about when I’m working out. I remember that I was out of the league.

When I think about the hiatus, it is crazy to think about how the NBA was fully shut down and we were able to put together a bubble to play basketball during the crazy times. The biggest thing that opened my eyes is that life is very short and we cannot take any moment for granted. I’ve learned about how to live more in the moment and love what I do when I play basketball and when I’m with my family.

Being in the locker room and stepping out on the court and hearing that the Bucks were not going to play, it threw us for a curve. But we all understood exactly where they were coming from. Maybe there wasn’t enough clarity between us and them. We really stood for what they were trying to do and what they did. It opened the eyes of people around the world. It was great what they did because we wouldn’t have accomplished as much as we did. The bubble and the hiatus and everything else has taught me not to take things for granted. It is so important to truly do what you love and to express how you feel, in whatever way you can.

What advice would you give to a younger player about the advantages of making the right play rather than the flashier play?

GC: Be yourself. Who you are is what got you to where you are now. A lot of guys come into the league and see the stars and try to get to that point so fast that you forget what got you here. I can’t reinvent my game as a pick-and-roll ballhandler who can make stepback three-pointers after a ton of fancy dribble moves. But I can perfect what my best skills are and that’s the biggest thing for me. If you don’t do that, you can get lost. Highlights are cool but Instagram stories go away in 24 hours. We only get so many opportunities. If you don’t perfect something, you’ll have trouble establishing yourself.

What are some of the goals that you have after you get your next contract?

GC: I’m not a guy who will say that he wants to start every game or average 15 points per game. One of my goals is to be a reliable player that plays like 20 to 25 minutes per game. I don’t want anyone to question if I’m going to get in the game tonight. Earlier in my career, it was hard not knowing that. Next year, I want my coach to feel like we have a better chance of winning if I’m on the floor.

Last year, I was one of the league leaders in the percentage of how many of my field-goal attempts were three-pointers. Next year, I want to shoot over 40% from beyond the arc. I want to be one of the league leaders in 3P% next year. I’d like to participate in the 3-point contest during All-Star Weekend if they have that next year. As a defender, I want to match up every night against the star player on the other team.