Former Chino Hills High School and USC Trojans star Onyeka Okongwu will be one of the first big men selected in the upcoming 2020 NBA Draft.

Okongwu, 19, is among the most talented defenders in this draft and projects as an immediate rotation piece for any team in the league.

He recently caught up with HoopsHype about his collegiate experience and what he can bring to a franchise at the professional level. Please note that this transcription was minorly edited for clarity.

How would you describe your game right now?

Onyeka Okongwu: First, you’re going to get a defender. I take a lot of pride in playing defense. I love defense. I’ve been playing elite defense since I was a little kid. I take a lot of pride in defense coming naturally for me. You’re also getting an athlete. I’m a player who can run up and down the court with a high motor. I am trying to improve my jump shot but I know I have good touch and polish. I can be a great face-up, low-post scorer. I had a lot of rip throughs and jabs. I know teams will have to respect that.

Are there any players whose game you feel yours can resemble at the NBA level?

"The high ceiling name is Bam Adebayo, which is, I don’t know if he has that playmaking that Bam has, but he does have a very good basketball IQ. 𝗘𝘃𝗲𝗿𝘆𝗼𝗻𝗲 𝗶𝘀 𝗹𝗼𝗼𝗸𝗶𝗻𝗴 𝗳𝗼𝗿 𝘁𝗵𝗲 𝗻𝗲𝘅𝘁 𝗕𝗮𝗺."

OO: I hear it all of the time, man, but Bam Adebayo is terrific. He is the kind of player that I hope I can become. He is a player I watch closely. He grew his game after college and honestly I hope to do the same thing as Bam Adebayo. We are both athletic. We are both strong. He is a great decision-maker and a playmaker for his position. I want to get better at passing the ball throughout the course of my career, too. I’m a willing passer and I pass out of the double-team a lot. I’ve shown flashes of becoming a good passer, though, and on-ball I’m able to make moves with my handle to get more of my teammates involved.

How can you help your team without the ball in your hands?

OO: I move around a lot on the court. I’m rotating a lot on defense. I can impact the game a lot. Whenever there is a switch, I hold my own. I’m also contesting everything at the rim. I’m getting every offensive rebound and every defensive rebound and blocking shots. I’m doing all of the little things, that is my type of game.

Only 10 percent of your field goal attempts came on jump shots while at USC. Where is your confidence with your jumper right now?

OO: I know if I set a good pick, I can always pop out to the free-throw line or even the three-point line. I’m working on my touch. I’m feeling more confident in my jumper. I didn’t really showcase that a lot at USC due to the personnel we had on our team. I’m polishing it every day, though, and I think I will be able to extend my range beyond the arc.

Looking back, you had a remarkable high school career for Chino Hills High School. How would you describe your freshman year, essentially winning what was a national title?

Onyeka Okongwu: I loved it. We played a national schedule. I loved playing with the Ball brothers. I’ve known those dudes for a long time so when I came into high school and I got to play with them, I was so happy because we were friends off the court. We were winning. We beat teams like Montverde Academy (Florida) and Bishop Montgomery (California) and we played at Hoophall Classic on ESPN. It made everything better. It was a fun season for me and the guys.

What is your scouting report on fellow draft prospect and your former teammate LaMelo Ball?

Onyeka Okongwu tells me his former teammate LaMelo Ball (@MELOD1P) is a "once-in-a-lifetime" player. The two prospects are both projected lottery picks. My interview with @BigO21_ is dropping on @hoopshype later this week!

OO: He is confident and he is creative. I’ve never seen anyone as confident as him. He is tall, he is about 6-foot-7, pushing 6-foot-8. He can handle the ball and he can shoot. He just has it all. He is talented. He is a once-in-a-lifetime player. I’m telling people that he is going to amount to a star. He has been my friend since I was a little kid. We have been doing this for a long time. We have always told each other we were going to see each other in the league and it’s about to become a reality. I just keep telling people, Melo, he’s very talented.

How did playing alongside future NBA players like Lonzo Ball at LaMelo at such a young age prepare you for where you are now?

OO: I was able to handle all the adversity that I learned from my freshman year. We went through some adversity as a team. A lot of teams go through adversity when you are very talented. That adversity helped me shape up to be the player I am today and the man I am today. That is going to help me in the future.

You won Co-Freshman of the Year with LaMelo Ball but once the Ball brothers left you won California Mr. Basketball two times! How were you able to adapt to the bigger role?

OO: You can always get better at basketball and there is always room for improvement. I wanted to work on different aspects of my game because coaches had a lot of confidence in me. So I wanted to put the time into just bettering myself as a player.

You really helped put Chino Hills on the map and you did wonderful things for the school. What is your relationship like with the city now? 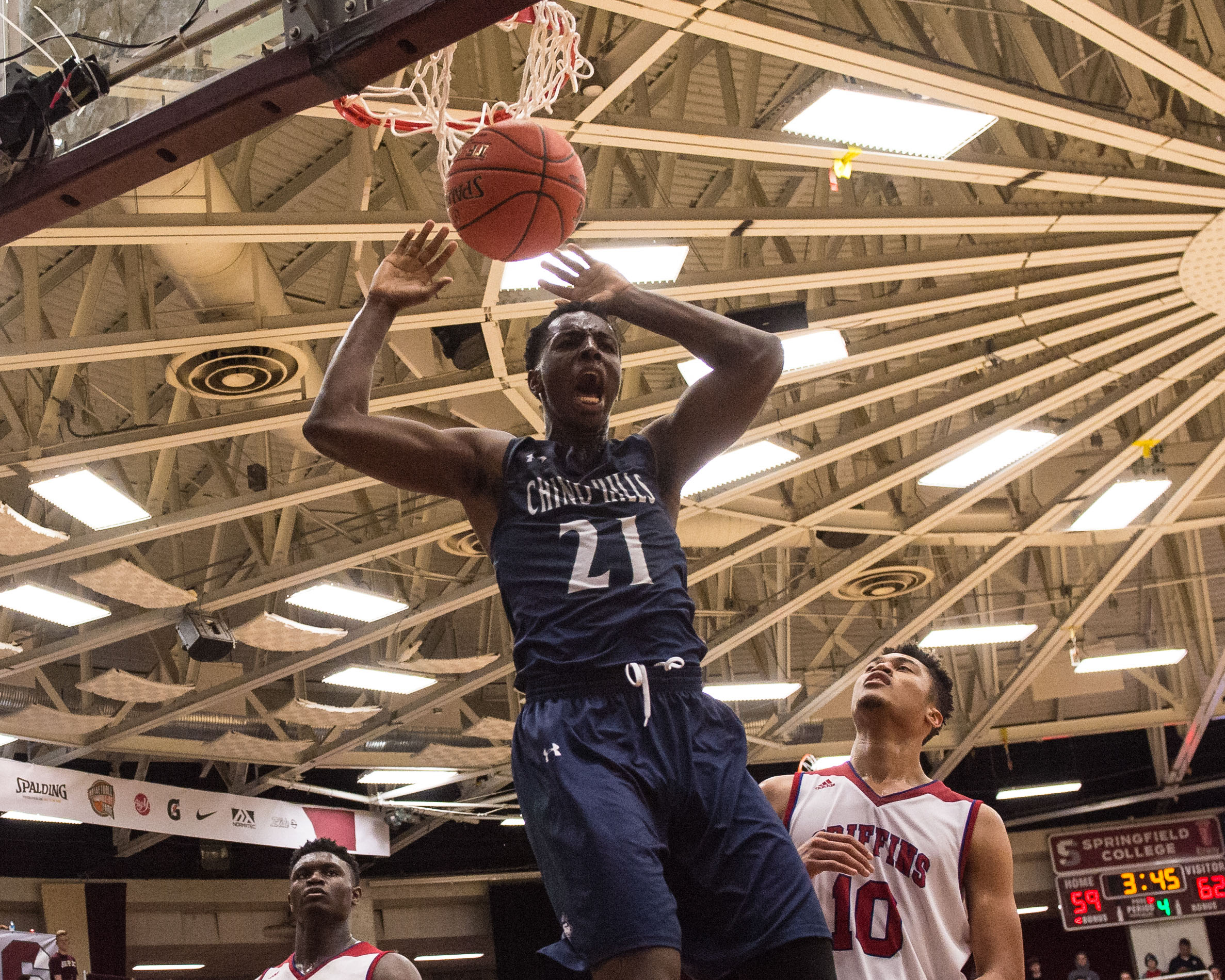 OO: I love Chino. They have shown me so much love these past five or six years. It will always be close to my heart. I want to always be able to give back to my community and show them that I care for them and that I love them. I love being around The Hills. I go there every week. I see my people and all of the folks that have supported me. I feel love whenever I’m there.

Who’s got next in Southern California? You’ve stayed in the area and I want to know who I should keep an eye out in the Los Angeles area.

OO: The list goes on. We’ve got Cassius Stanley (Duke) in this class. Eli Scott (LMU) from Chino. Joshua Christopher (Arizona State) and then Evan Mobley (USC) and his brother Isaiah Mobley (USC). My boy Ethan Anderson (USC) is solid, man! That class I had is really solid. Jaylen Clark (UCLA) is under-the-radar but he is a dog and I believe in him. We have a lot of players from my area that can really make some noise.

That is a great list. What do you expect out of the USC Trojans next season?

OO: They have a whole new team. I’m excited to see what they’re going to be. I have confidence in my boys. I’m with them all of the time. It’s always love whenever I see my boys from USC. They’re going to be a good team. They have a lot of new faces but I know they’ll handle business out there.

Growing up near Los Angeles, were you a fan of the Los Angeles Lakers?

OO: Nah, man, the Clippers. Blake Griffin and Chris Paul and they were in the playoffs and Lob City was here. That was my team.

Looking forward, what are some goals that you want to accomplish in the NBA?

OO: I just want to win, man. I just want to win a championship. That is my number one goal. Besides that, I want to be the best player I can be. On and off the court, I want to maximize my potential and be a good teammate and be coachable. Longterm, I want to help out the little ones. Little kids need inspiration, whether that be camps or charity events. I want to be able to help the youth, the generation coming after me.

It has been a much longer offseason than usual. How have you been spending your time since the season ended?

OO: I live out here in Los Angeles. I go back and forth from L.A. to my mom’s house in Chino Hills. For the most part, I just work out and see my people like my mom and my sister and my little dog at home. I’m a pretty simple guy. I’m trying to learn how to play the keyboard a little bit. I do lots of yoga. I’m gaming, too, on my XBOX. I play Madden. I like to use the Seahawks, Ravens and the Chiefs. I like quarterbacks who can move, I love mobile quarterbacks.

Tell me a little bit about your dog! How old is it and what kind of dog?

OO: I got this dog two months ago named Reign. He is a little cockapoo, a little small dog for me and my family to share. He goes back and forth with me to my mom. I didn’t want a dog that was too big because I didn’t want my mom to have to look after a huskie or a german shepherd. He is a little furry best friend.

How is your progress on the keyboards? What do you like to play?

OO: I’m getting a little better. I know the basic songs like “Mary Had a Little Lamb” and I’m trying to do my own thing, too. I want to make my own music a little bit, but nothing serious. I let my little brother borrow the keyboard, he wants to make some songs, too.

Who are some of your favorite musicians that you like to listen to?

OO: I love Bryson Tiller and Tee Grizzley and Lil Baby and NBA YoungBoy. Those are my favorite artists right now.