Picture the famous Apollo 13 “Houston we have a problem” scene. That’s the reality for the Rockets.

Houston has now been eliminated in the first round three times, lost three times in the Western Conference Semifinals, and lost twice in the Conference Finals since the 2012-13 season.

Despite pairing James Harden with All-Star co-stars during that span, including Dwight Howard, Chris Paul, and Russell Westbrook, it hasn’t been enough to launch the Rockets into the NBA Finals.

All-Stars Harden and Westbrook are on the wrong side of 30 and on the books for the next two seasons at a combined $171 million and have player options for the 2022-23 season at roughly $47 million each.

“Houston is in a bad spot,” one Eastern Conference scout told HoopsHype. “You’ve got two guys making $80-plus million. You’re stuck with those guys and married to a small ball roster. I could see big changes for sure. Not changes with the roster, but potentially the coach and GM.”

With a pivotal offseason ahead for the Rockets, HoopsHype spoke with one general manager, two executives, two scouts, and one coach for their takes on what Houston should do with Harden, Westbrook, coach Mike D’Antoni and general manager Daryl Morey. 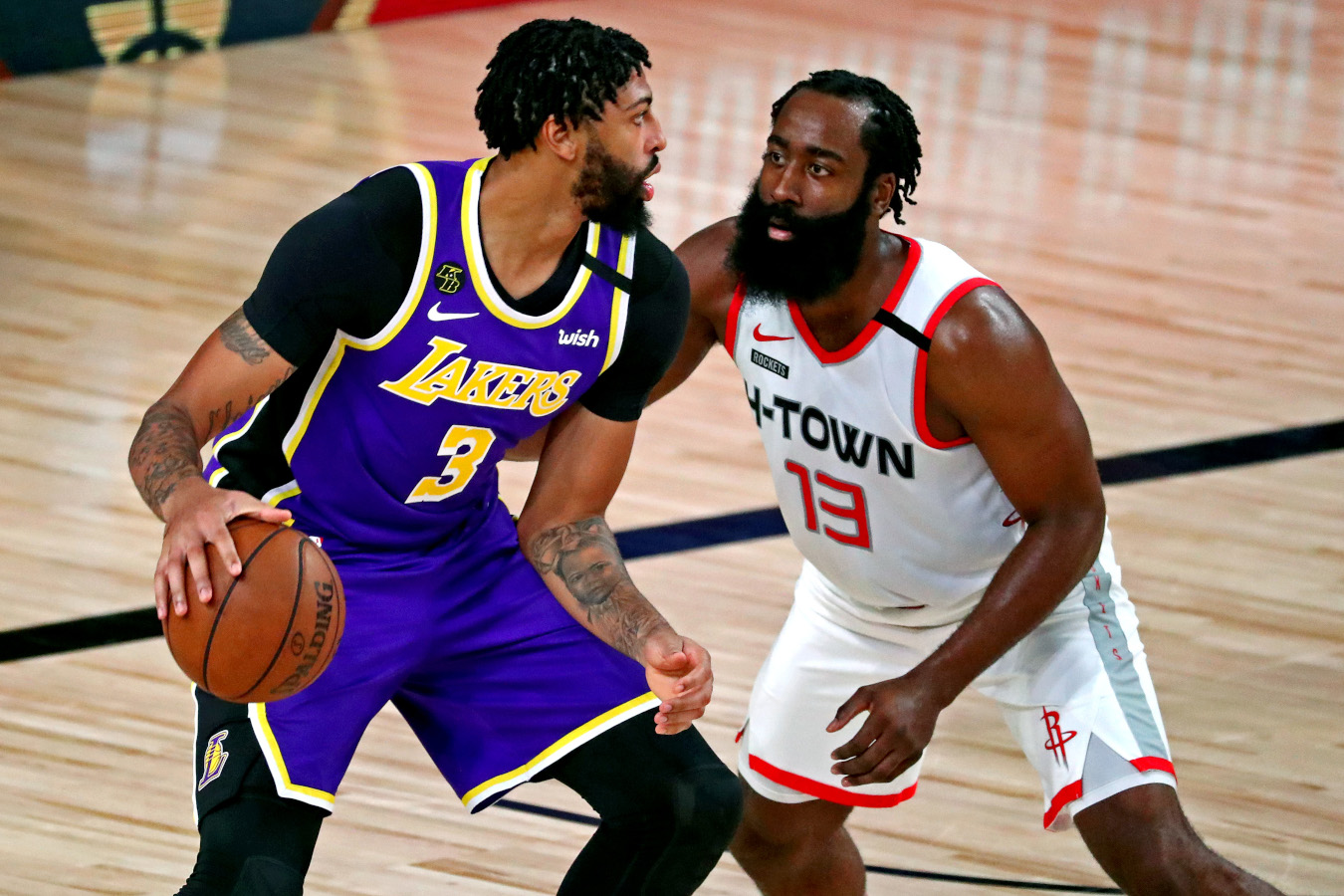 The NBA’s leading scorer the past three seasons and former MVP was deemed too valuable to trade for Houston. Considered a Top 5 player in the league, the only reason to move Harden now would be to begin a full rebuild, which isn’t happening.

“I wouldn’t move Harden,” one Eastern Conference general manager told HoopsHype. “He’s still so good, and they’re too old right now to just start a rebuild unless you’re getting a Jayson Tatum or Luka Doncic to rebuild around. I’d probably run it back in some shape or form, especially with next year being a compressed time period. I would keep all options open, but I wouldn’t be selling Harden just to the highest bidder. In the last two years, they easily could have won it all, so I don’t think it’s fair to panic yet if they lose.  Now, if there’s a great deal out there, that’s a different story, but I still think it’s worth riding out one more year. If Westbrook is tradable, get it done.”

Eric Gordon (31), Robert Covington (29), and Danuel House (27) are all in the prime of their careers. PJ Tucker (35) has become a small-ball center, and remains hopeful to work out an extension with the Rockets this offseason, a league source told HoopsHype.

“I feel like we’re a piece away,” Harden said after Game 5. “We’ve just got to keep trying to figure it out, keep trying to grow and put the right pieces around me and Russ to get to where we want to go.”

With the Rockets projected to be over the salary cap for next season, they’ll have little financial flexibility to sign free agents. Morey will have to make a trade to bolster the roster for the missing piece. If Morey can’t add another star, Harden may have to adjust his game to playing off the ball more often to increase Westbrook’s effectiveness. 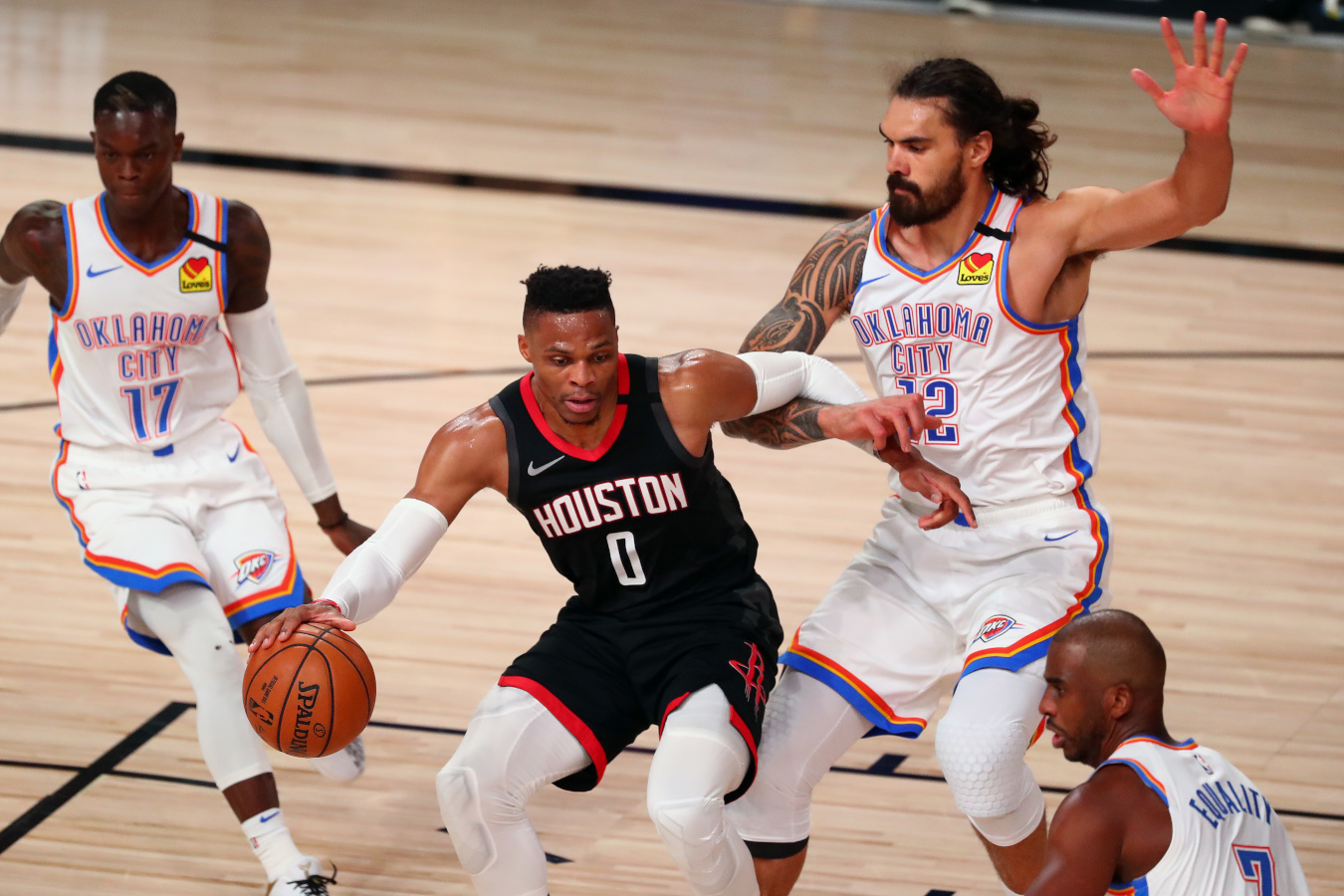 Despite being named an All-Star and shooting a career-best 47 percent from the field during the regular season, the consensus was trading Westbrook would be ideal, but difficult at best given his salary.

“Westbrook isn’t a good compliment for anyone, in my opinion,” one Eastern Conference coach told HoopsHype. “He has to be the main guy. He can’t shoot. He needs the ball. He’s not an off-ball player. Hard to play with two max guys who need the ball. Maybe it’s possible, but it seems like two good players instead of Westbrook would be better the way they play.”

One possible solution to maximize Westbrook’s skill set while taking the usage load off of Harden is to have the ball in Westbrook’s hands more. Westbrook is at his best attacking the defense with his speed and strength on drives to the basket. In Oklahoma City, Westbrook was able to be a playmaker for Harden, who moved effectively without the ball coming off screens.

After playing his first season under D’Antoni, Westbrook believes the small-ball approach could be a model of success in the coming years if the core is allowed to gel and stays healthy.

“We have the right guys that can do it,” Westbrook said, following Game 5. “It’s definitely sustainable. It’s just here we had a lot of obstacles that deterred us. Myself in trying to get healthy, missing a few guys, here and there. It definitely changed our rhythm a little bit. It’s definitely something you can build off of.”

Houston traded its starting center and best rebounder and shot-blocker, Clint Capela, in a four-team deal to acquire Covington and further emphasize a small-ball approach, and Tucker moved to center.

“He brings it every night,” D’Antoni said regarding Westbrook after Game 5. “You’ve got to put everything into context. We were rolling. He was rolling. You have a lay off for four and a half months. You come back, and these are not normal circumstances, so it’s even harder to judge some things, but overall, he’s great.”

In Oklahoma City, Westbrook and Harden reached the Western Conference Finals and then the Finals the following season before Harden was traded to Houston. By default, Houston will likely have to keep the duo together and try to tweak the rest of the roster and alter Westbrook’s playing style to have similar success nearly a decade later. 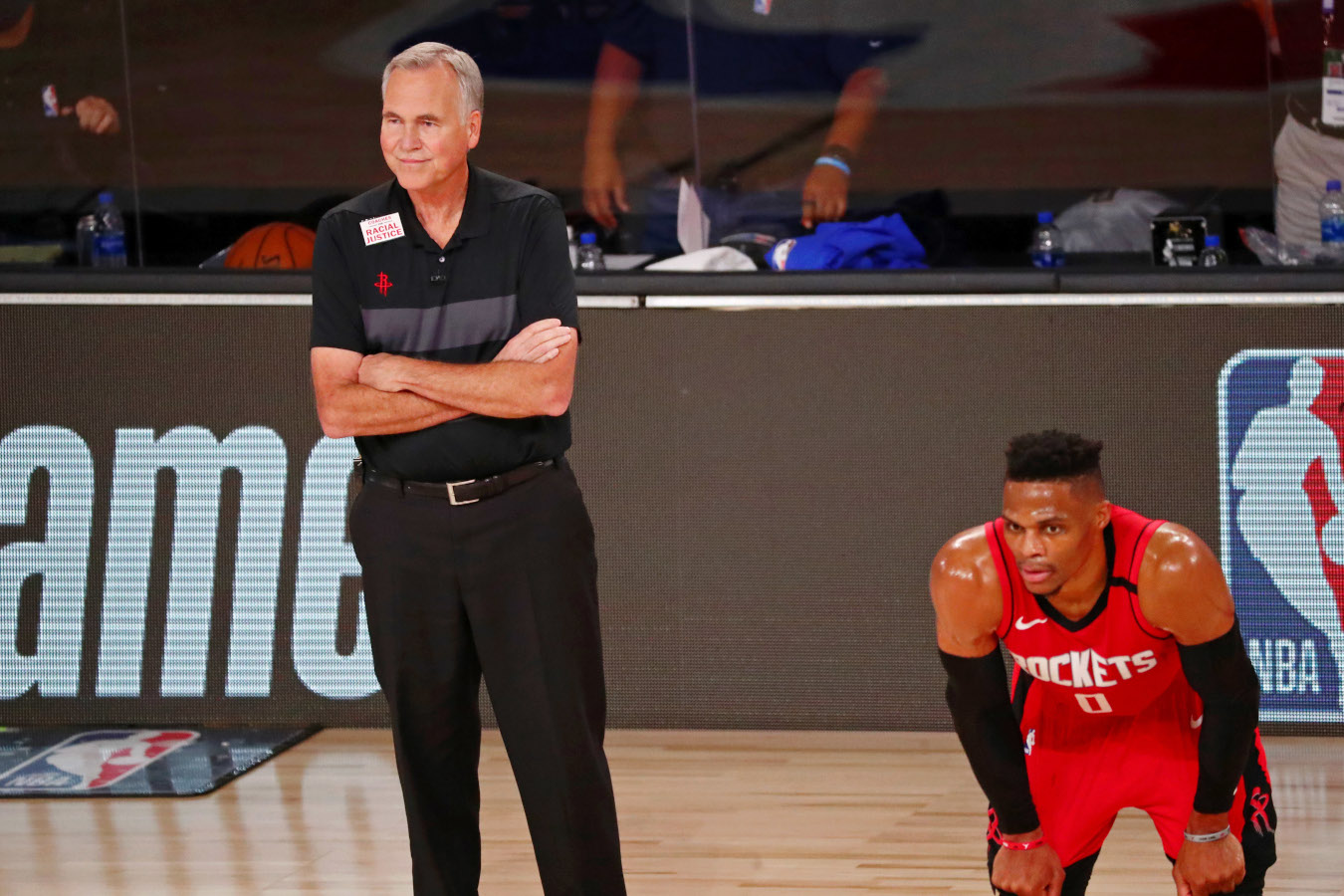 THE FUTURES OF D’ANTONI AND MOREY

After a blockbuster trade for Westbrook that netted a consecutive exit in the Semifinals and another failed trip to the Finals in the Harden era, one scout believes ownership needs to make sweeping changes.

“They need a GM and coaching change!” another Eastern Conference scout told HoopsHype. “They need two people on the same page about playing f—— defense. Look at the Heat, Celtics, Lakers, Clippers. They all have two-way players. They’ve got to do something. They can’t keep it the same.”

However, it’s not going to be fiscally that simple for one of the positions.

Morey and the Rockets agreed to a five-year contract extension, as reported by the Houston Chronicle in March of 2019. Rumors have swirled about his job security since his infamous Hong Kong tweet, but he’s expected to retain his job according to ESPN.

“It depends on the expectations of the owner,” one Eastern Conference executive told HoopsHype. “He seems to be very involved. Daryl Morey has a lot of money left over. Mike D’Antoni will most likely be a scapegoat. They gave up a lot for this team to do a rebuild right now. At least another year to see what they can do seems likely.”

D’Antoni enters the offseason as a coaching free agent. He’s been linked heavily to the Indiana Pacers, and now the New Orleans Pelicans, according to the Houston Chronicle.

“If they have a new coach, it depends on the style of play,” another Eastern Conference executive told HoopsHype. “Mike D’Antoni is the best fit with the roster. With the losses teams will have this year, I don’t know who would want to take on that money and give up valuable assets. They need height, shot blocker, and rebounder like Clint Capela, who they traded.”

D’Antoni echoed the executive’s claim that he’s the best fit for the roster as constructed, and his small-ball approach has won elsewhere.

“Golden State did a pretty good job with theirs,” D’Antoni said. “It’s way too early to assess that, but yeah, I definitely think you can. I think Golden State has proven that. You can’t tell me that if the Hamptons Five was able to play for 48 minutes, that they wouldn’t be very good.”

Following the Game 5 loss, Harden praised D’Antoni for moving him to point guard, coming up with different schemes, and “changing the game.” Harden called his time under D’Antoni an “unbelievable experience.”

“I don’t get into contracts, but one thing I know about Mike is he’s a hell of a person,” Westbrook said. “That’s what I admire more about anybody is who they are as people.”

D’Antoni has always been a beloved player’s coach, and Morey has made several splashy additions, but Rockets owner Tilman Fertitta is on the clock to maximize Harden’s prime before it’s too late.