Well, that did not turn out to be the case whatsoever, as the just-announced 2019-20 All-NBA teams saw a record number of international players being showcased, with six making the cut: Giannis Antetokounmpo, Luka Doncic, Nikola Jokic, Pascal Siakam, Ben Simmons and Rudy Gobert.

That’s why many rightfully believe the Association currently boasts the best international crop of talent ever. 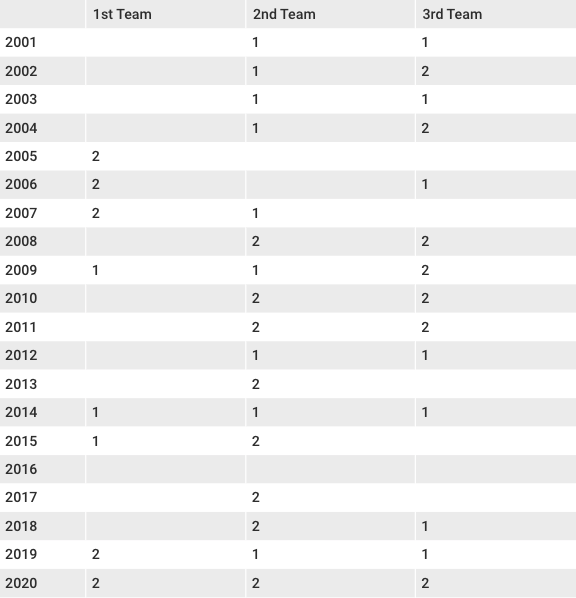 Full breakdown of the number of international players named to All-NBA teams this century.

Just look at Antetokounmpo and Doncic, who appear set to be MVP frontrunners for years to come, Jokic, a tier just below them who could easily receive MVP consideration in the coming seasons, and Gobert, the most impactful defender in basketball over the last few campaigns. What’s more, those first three guys are all 25 or under while Gobert is just 28 and showing zero signs of slowing down anytime soon.

The international crop of talent is so stacked, in fact, that they set a record for most non-Americans being named All-NBA this year without Joel Embiid, born in Cameroon, or Karl-Anthony Towns, who represents the Dominican Republic in international play, making the cut despite being two of the very best big men the league has to offer today.

Even beyond the super-elite talent, the NBA has a ton of international guys who are All-Star level or just below that, like Nikola Vucevic, Danilo Gallinari, Goran Dragic, Jusuf Nurkic, Jamal Murray and Shai Gilgeous-Alexander, the latter two of whom are still young and could become All-NBA-level guys one day.

That’s an outrageous amount of non-American talent being showcased in the Association at one time.

Also interesting is the fact that the NBA’s crop of players who made All-NBA this year come from four different continents, which speaks to just how global the game has become in 2020.

And with talents like Deni Avdija, Killian Hayes and Jonathan Kuminga set to be drafted into the NBA over the next couple of years, the train of elite international players in the Association doesn’t appear to be slowing down.