Excerpted from Three-Ring Circus: Kobe, Shaq, Phil, and the Crazy Years of the Lakers Dynasty, published on September 22, 2020 by Houghton Mifflin Harcourt. 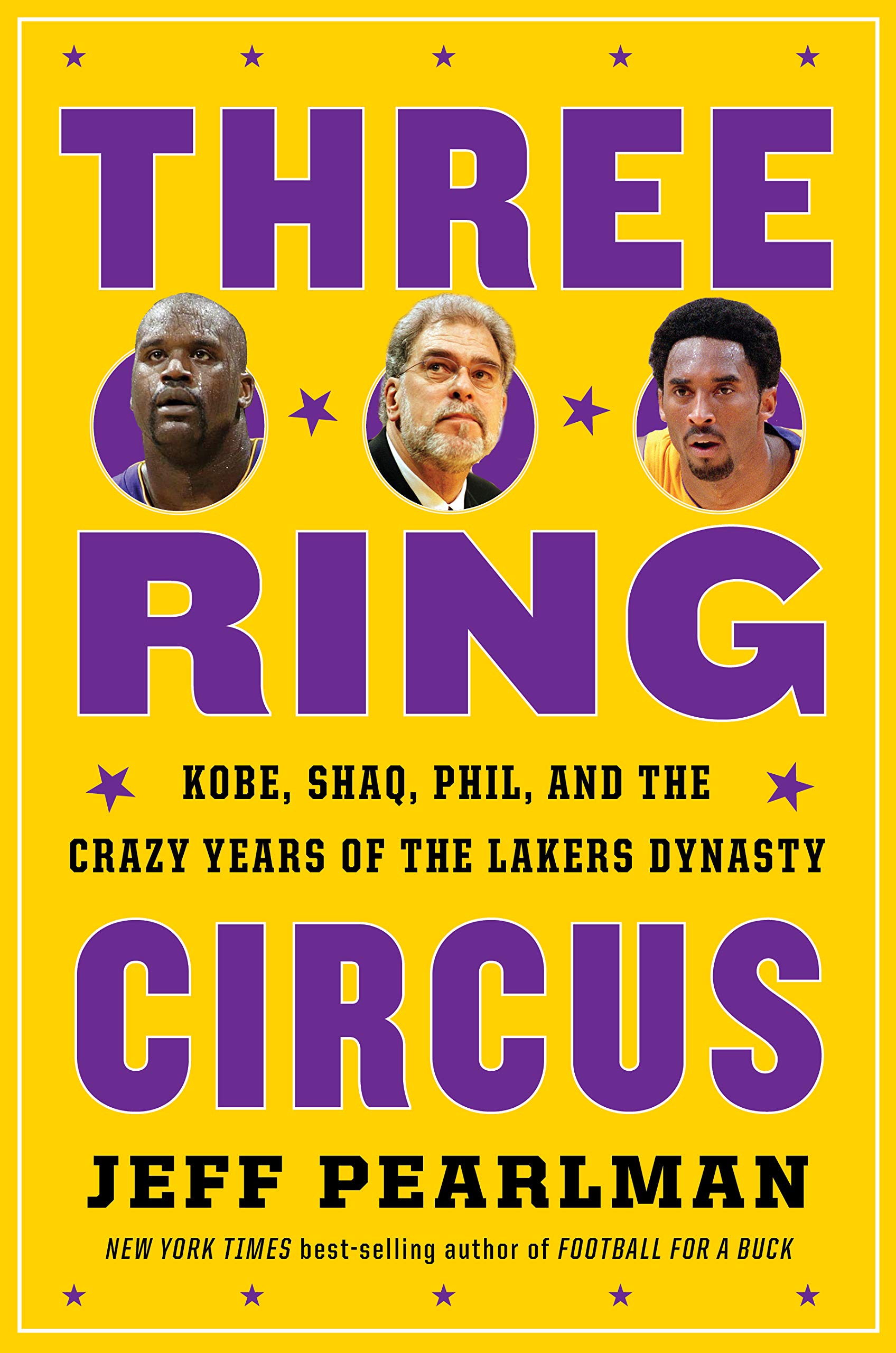 You can buy this book on Amazon here.

After the 1998-99 Los Angeles Lakers wrapped a disappointing 31-19 season with a humiliating Western Conference Semifinals sweep to the Spurs, it was clear a dramatic coaching change was in order. Del Harris had been fired after a mere 12 games, replaced by the equally solid-yet-unspectacular Kurt Rambis. But this was Los Angeles – Hollywood! Stars! Bright lights! It was Shaq and Kobe and a must-win ordinance from Jerry Buss, the franchise owner.

So that’s why, 21 years ago, the Lakers went fishing for the biggest shark in the ocean – Phil Jackson.

Here’s how it went down …

For the first time in nearly two decades, Phil Jackson had been blessed with a year to himself to fish and read and take long walks and . . .Yawn.

He had spent nine seasons guiding the Chicago Bulls, and what he thought would be meaningful down time was, instead, flat and dry and sort of depressing. His marriage to June – 24 years strong – ended in divorce. He tried giving speeches. He volunteered for Bill Bradley’s failed presidential campaign. He returned to his home in Montana. “I was searching for something,” he recalled. “But I wasn’t sure what that was.”

When the Lakers called, it wasn’t a shock. Throughout the disappointing 1998-99 run, Jackson’s name appeared in the Los Angeles media, oh, 50 times per month. First as a speculative replacement for Del Harris. Then as a speculative replacement for Kurt Rambis, the interim coach. He had infuriated many members of the Lakers’ front office in the spring of 1998, when ESPN the Magazine published excerpts from his diary. One of the passages featured Jackson musing about coaching the Lakers and wondering whether Shaquille O’Neal had the intellectual capacity to play in the triangle offense.

Harris, in particular, was agitated. There are things you do in the professional coaching world and things you don’t do. “You don’t campaign for another person’s job,” Harris recalled years later. “What Phil did – it was classless. It wasn’t right.”

Jackson didn’t see it the same way. He was merely discussing a hypothetical –  What would O’Neal be like in the system? Lakers general manager Jerry West, too, was upset. He and Jerry Krause, the Chicago GM, had been close since their time together with the Lakers in the 1970s, and during the Jordan dynasty the Bulls’ GM would often call his Los Angeles counterpart to complain about Jackson’s arrogance, dismissiveness, rudeness. “ told me in no uncertain terms that Phil was trouble,” West recalled. “That we should stay away from him.”

Krause thought Jackson to be more than merely manipulative. He considered him mean. Having faced Jackson during their playing days, West didn’t have to be told twice. During the 1972 NBA Finals, between the Knicks and the Lakers, West was walking off the floor after one of the games when his nose came into direct contact with Jackson’s elbow. “Phil . . . broke the guy’s nose,” recalled Walt Frazier, New York’s point guard. There was also the matter of Jackson’s recent criticism of the Lakers’ handling of Dennis Rodman. He felt the team didn’t give his former star enough of an opportunity, and said so. “Apparently we don’t do things right,” West fired back.

Within a week of the end of the 1998-99 season, O’Neal made a demand of Armato. He called him and said, “Listen, tell I’m not playing for Kurt. Nobody wants to play for Kurt. If Kurt’s coach next year, I ain’t playing.” The Los Angeles Lakers were not supposed to be an operation that developed coaches and provided them with time to learn on the job. No, the organization – what with its 11 championship banners and nine uniform numbers dangling from the rafters – was all about excellence. Plus, the new Staples Center would be open for business come October 17, 1999. Everything concerned winning in the present. Absolutely everything.

In June 1999, West sucked up his pride (as well as his commitment to Rambis) and flew to Chicago to meet with Todd Musburger, Jackson’s agent. That same week, he reached out to Jackson via phone, the first meaningful conversation the two had ever had. What began as awkward and stilted flowed into awkward and stilted. But useful. “We have talent here,” West told him, “we just lack leadership and maturity. It’s probably not all that different than what you walked into with the Bulls. This team is ready.” Jackson told West that he always felt unappreciated in Chicago; that this call meant the world to him. He said he had been watching the Lakers, and he, too, believed they were of championship ilk.

Several weeks later, at the invitation of a friend named Mark Bilski, Jackson was in Alaska, fishing with his sons, Ben and Charlie, on Iliamna Lake. The rainbow trout and northern pike weren’t biting, so they stashed their poles and traveled up the river to take in breathtaking Petrof Falls. Upon returning to the village a few hours later, the three Jacksons were surrounded by a handful of youngsters.“Are you Phil Jackson?” a boy asked.

“I hear you got the job with the Lakers,” the youth replied.

The introductory press conference was held on June 16, 1999, at the Beverly Hilton. With a room overflowing with media members and with Jackson’s five children in attendance, West stepped to the microphone and invited forward the newest coach of the Los Angeles Lakers, a man who would be paid $6 million per season for five years, plus a $2 million bonus for each NBA championship.

At his home in Newport Beach, Dennis Rodman – a thrice champion with the Bulls under Jackson – was convinced his phone would be ringing any day now. “They ain’t gonna win with what they’ve got, I’ll tell you that,” he told a reporter. “I know what’s going to happen. They’ll wait until the last minute, and then they’ll call me.” (He was incorrect.)

No one was more euphoric than O’Neal, whose first seven years in the NBA were spent under five different head coaches – none of much note. Jackson and his new center chatted via phone shortly after the press conference but didn’t meet until several weeks later. That was when O’Neal, visiting Kalispell, Montana, for a concert to promote his fourth studio album, Respect, decided to take the 10-mile drive to Jackson’s home in Flathead Lake. In his autobiography, Shaq Talks Back, O’Neal writes that he and his bodyguard, Jerome Crawford, arrived at the coach’s house unannounced. Jackson said that is simply not true. “I knew he was coming,” he said. “I was given a heads-up and I thought it was great. I wanted to meet him.”

O’Neal showed up earlier than anticipated, and Jackson wasn’t home. But Chelsea and Ben, two of his children, were, so O’Neal spent the next 25 minutes jumping with them atop an enormous trampoline. “I go in the house, he’s got all these Zen books and all the championship balls, and his rings right there,” O’Neal recalled. “Then . . . I decide I’m gonna take a swim. gives me some shorts. I jump in the lake. It’s freezing. So I start doing flips off the dock. They were laughing at me because I’m not completing my flips, landing on my back like some knucklehead at the community-center pool.” Before long, dozens of boats congregated near Jackson’s property, awestruck by the sight of the Kazaam genie soaring through the air.

When Jackson arrived, he was greeted by O’Neal gazing at the championship trophies. It was a scene out of a corny sports movie – the glory-deprived star staring longingly at a pane of glass as the sunlight’s reflection creates a holy glow. “You know,” Jackson said, “you can get one of those if you listen to me.”

“I believe you,” O’Neal replied.

“But before we start,” Jackson said, “I could use your help with something.”

He walked his new center toward the edge of his property, which ran adjacent to a lake. An enormous fallen tree was lying along the shore, and Jackson needed it relocated. He tied a rope around one end and attached the other end to his boat. “He’s there pulling it with the boat,” O’Neal re-called, “and I’m pushing the tree.”

Jackson told O’Neal to hang on to the tree, so he did – as the boat kept going and going. It distanced itself from the shore – “and then I had to swim back from this damn island,” O’Neal recalled. “It was far – I don’t know how far, but it was far. And you know what I’m thinking? This man is challenging me.”

Later on, Jackson looked over the 350-pound goliath standing before him. Frustrated by one lost season after another, O’Neal spent the summer lifting weights, watching what he ate, ingesting creatine and other supplements.

“How much you weigh?” Jackson asked.

“I want you to lose about 15 pounds,” Jackson said. “The bigger you are, the harder it’s gonna be on your knees, and I want you playing 40 minutes a game.”

With that, Shaquille O’Neal departed the property and, soon enough, found himself back in Los Angeles, trying to shed the weight and prepare for what he believed would be the season of his life.

He would not regret it.

Excerpted from Three-Ring Circus: Kobe, Shaq, Phil, and the Crazy Years of the Lakers Dynasty, published on September 22, 2020 by Houghton Mifflin Harcourt.

You can buy this book on Amazon here.