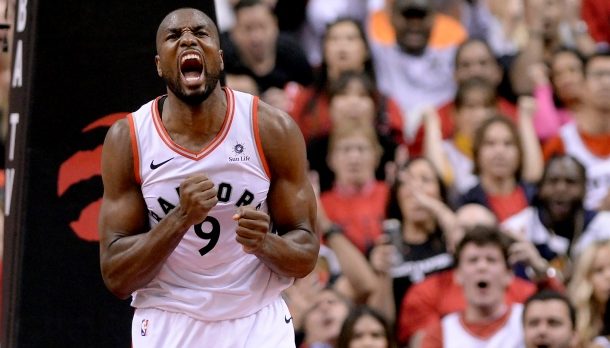 Toronto Raptors beat Bucks, headed to NBA Finals Lori Ewing, The Canadian Press Published Saturday, May 25, 2019 7:16AM EDT Last Updated Sunday, May 26, 2019 9:55AM EDT TORONTO -- The Toronto Raptors are headed to the NBA Finals, a Canadian basketball success story 24 years in the making

Kawhi Leonard poured in 27 points and hauled down a game-high 17 rebounds to lead the Raptors to a thrilling 100-94 victory over the Milwaukee Bucks that clinched the Eastern Conference finals series 4-2.

Kyle Lowry, playing through the relentless pain of a sprained thumb, had 17 points and eight assists, and grabbed the game ball after the final buzzer sounded on a spectacular comeback The Raptors became just the sixth team in NBA history to win a conference final after losing the first two games "Beating this (Bucks) team four times in a row is almost mind boggling," Raptors coach Nick Nurse said Pascal Siakam chipped in with 18 points, while Fred VanVleet finished with 14

The road doesn't get any easier for Toronto.

Asked what it means to finally break through after seven seasons of playoff frustration, Lowry say "it means a lot.

" "It's taken a long time to get here in my career, 13 years, seven years here," he said, his baseball cap reading "NBA Finals" pulled down over his forehead "I'm going to savour the moment, but I'm not satisfied Our goal is to win the NBA championship" Giannis Antetokounmpo, favoured to win the league MVP after leading the Bucks to a league-best 60-win season -- two better than Toronto -- had 21 points and 11 boards, while Brook Lopez had 18 The Raptors got off to a shaky start reminiscent of Game 5, giving up a 17-2 Bucks run that straddled the first and second quarters to trail by 15 points early in the first half Toronto closed the third quarter with a 10-0 run capped by three Leonard free throws that sliced the Bucks' advantage to 76-71 with one quarter left to play "We all felt like we were still in the game," Leonard said "We had a little bit of momentum left We just talked amongst each other once again and said 'Let's go out here and enjoy it, and we can play better offence and defence We ended up doing that, and we ended up winning the game" The Raptors continued to ride a massive wave of momentum -- a 26-3 run punctuated by a massive Leonard dunk from a steal and hand-off from Lowry with 6:46 to play that prompted a roar from the crowd that rocked Scotiabank Arena

The fans didn't sit down again until the game's final buzzer blew.

"We were on a run, and the building exploded after that dunk," said Leonard, the gleaming Eastern Conference trophy sitting between him and Lowry in the post-game press conference

"Kind of got us a little bit more adrenalin to get another stop.

I've been playing with (Lowry) for awhile now, and it's just chemistry right there" The Bucks pulled to within a point with just over five minutes to play, but three-pointers by Marc Gasol and Leonard -- Leonard's bouncing up off the rim before falling, in similar fashion to his conference semifinal Game 7 buzzer-beater against Philadelphia -- had Toronto up by five with 3:04 to play Leonard, who missed all but nine games last season with San Antonio because of a serious quadriceps injury, was breathing heavily, hands on knees, after missing a dunk that Siakam tipped in with 2:06 to play A pair of free throws from Lopez made it a three-point game with 296 seconds to play, then Siakam was fouled with seven seconds left The Cameroon big man sank one Then Leonard was fouled with 39 seconds left, and with the crowd chanting "M-V-P!" Toronto's superstar sank both Game over Lowry could barely contain his emotions as the final seconds ticked down Masai Ujiri, who acquired Leonard in the off-season for much-loved DeMar DeRozan with a lofty goal of an NBA championship in mind, addressed the delirious, confetti-covered crowd after the game, saying "We came all this way to win in Toronto And we will win in Toronto!" The Raptors president called Leonard the league's best player "I don't care about being the best player, I want to be the best team," Leonard said in response "Just before the season when we made the trade Masai felt that way about me He told me how he felt It's turning out well now We're in the Finals and we're not done yet

" The Raptors were making just their second Eastern Conference finals appearance in franchise history, and first since they stole two games off LeBron James and the Cleveland Cavaliers before being ousted in six games in 2016.

Ujiri's rebuild included firing coach Dwane Casey and promoting Nurse, then swapping Jonas Valanciunas for Gasol at February's trade deadline If fans complained then, they aren't now "We've got great fans," Lowry said "They support us through the good times and the bad times Right now is a great time, and we're glad that they're our fans

" Scotiabank Arena on Saturday night was a raucous sea of red.

Drake, who's been a lightning rod in the series since his impromptu shoulder squeeze of coach Nick Nurse in Game 4, wore a black hoodie that read on the back: "Kawhi Me a River.

" A thunderstorm that rolled through the city had threatened the celebrations in Jurassic Park outside the arena, but the area was opened about an hour before tipoff, and quickly filled by the thousands of fans who had stood in the massive line that snaked around the arena, past Union Station and up Yonge Street In his pre-game availability, Nurse was asked: how much does a close-out game come down to pure heart and desire? "Eighty-six per cent of it," the coach said "We end up showing all these clips and all these coverages and all these matchups and all these things and blah, blah, blah At the end of it every time, I say, 'This is about 15 per cent of the game' "The rest of it is are we going to sprint back and are we going to communicate great and are we going to get physical, are we going to get into bodies, are we going to block out with some toughness I can keep going on and on, but that's where the 85 per cent comes from" Toronto was all heart down the stretch on Saturday

The Raptors dropped the first two games in Milwaukee, but rebounded to win three in a row, including a thrilling 105-99 victory on Thursday at Milwaukee's Fiserv Forum that saw Toronto climb out of an 18-4 hole.

Only five teams in NBA history have come back from a 0-2 series deficit to win a conference final The last time was in 2012, when an Oklahoma City squad that included Serge Ibaka battled back to beat San Antonio Fans had to be concerned about the series going back to Milwaukee for Game 7 in the first quarter The Raptors went four minutes 41 seconds without a basket in the first quarter to trail by eight points They tied it up with 3:50 to play, but the Bucks closed the quarter with a 15-2 run to lead 31-18 heading into the second The Bucks stretched their lead to 15 twice in the second quarter, but a VanVleet three capped a 21-8 Raptors run that pulled them to within two points Milwaukee took a 50-44 lead into the dressing room at halftime Related Stories