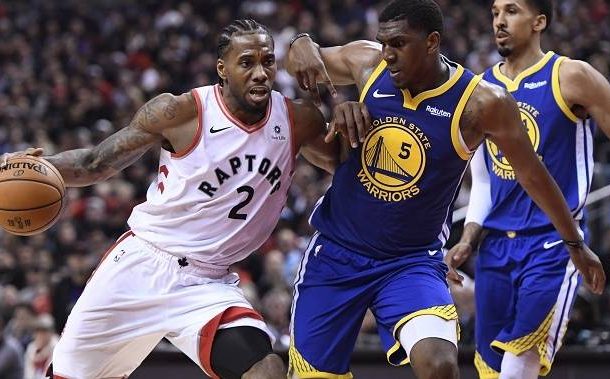 Golden State Warriors coach Steve Kerr said on Thursday his team didn't know the Toronto Raptors very well ahead of Game 1, adding that it will be good to "have a game on tape" A A + The Toronto Raptors , led by Pascal Siakam, defeated the Golden State Warriors 118-109 in Game 1 of the NBA Finals Thursday night, despite a late-game push from the defending champs The game marked the first time the Raptors have been in the NBA Finals, also making it the first time a finals game has been played outside the US READ MORE: Toronto Raptors face off against Golden State Warriors in Game 1 of NBA Finals Siakam, a most improved player nominee, took on one of the most elite defenders in the game in Draymond Green and finished with 32 points After Game 1, Raptors coach Nick Nurse recalled how Siakam came to the gym after the team was eliminated in the playoffs two years ago and said “Listen, I need to learn how to shoot” “He was extremely hard working,” Nurse said “Just super, super committed to finding a place in this league and improving his game” Gasol, who was acquired by the Raptors at the trade deadline, played his best game as a Raptor and finished with 20 points and seven boards but fouled out with just over a minute left in the game View link » Leonard, who has been on a tear in the playoffs, finished with 23 points, eight rebounds and five assists

Lowry, brought the Raptors home with seven points and a couple of key charges.

Danny Green shrugged off the shooting slump that plagued him in the conference finals to finish with 11 Warriors backcourt pairing of Steph Curry and Klay Thompson were held at bay, finishing with 34 points and 21 points, respectively Early in the first quarter, Curry made history being the first player ever to make 100 career three-pointers in the NBA Finals READ MORE: NBA calls Toronto Raptors about Drake’s courtside antics Green found himself in foul trouble, clocking his fourth with 7:11 to go in the third quarter Warriors coach Steve Kerr decided to leave him in and the Raptors took full advantage Siakam soared past a defenceless Green in transition for a layup, and gave the Raptors a 73-63 lead Green couldn’t risk getting a fifth foul, and had no choice but to let Siakam go to the rim unbothered “They played a great game, they deserved to win,” Kerr said

“We’ve got to play better if we’re going to beat them.

” Kerr had talked about the magnitude of the Finals compared to the first three rounds of the playoffs “It’s just different,” he said in his pre-game press conference “Everything about it feels different It completely takes you out of your comfort zone” In the fourth quarter, with the Raptors up double-digits and less than five minutes to go, the Warriors found themselves in even more foul trouble, putting Raptors in bonus situation

Shortly after, Thompson was called for a technical foul and Leonard hit the ensuing free throw.

The final dagger came with three minutes left after Fred VanVleet hit a three to put the Raptors up 110-98 WATCH: Former NBA player Jerome Williams says history of the Raptors ‘is being written’ DeMarcus Cousins, who missed both regular season games between the two teams and had been out since April 16 with a torn quad, made his debut in the second quarter Kevin Durant, who last played May 8 where he suffered a calf injury against the Houston Rockets remained inactive Questions surrounded the Raptors and whether the stage was too big but Toronto seemed to welcome the enormity of the situation The game started at a hectic pace with both teams seemingly trying to feel each other out but the Raptors broke through and ended with a 10-point lead at half, up 49-39 The Warriors, coming off 10 days of rest after sweeping the Portland Trailblazers in the Western Conference finals, were held to just 436 per cent shooting while the Raptors finished over 50 percent READ MORE: Raptors fans line up outside of Jurassic Park 15 hours before tipoff Chants of “Kyle” and “Danny” broke out at several points during the game and the 5000-plus fans outside in Jurassic Park were joined by other ones around the province, including 20,000 fans in Mississauga, and thousands in Scarborough and Burlington “It seems like each game it gets better and better,” VanVleet said about the fans after the game Lowry said it was the loudest he had ever heard the building

“It was pretty crazy in there tonight,” he said.

“We’ve got the best fans in the NBA and they’re just showing it every single night” A 58-24 regular season record meant the Raptors finished a game ahead of Golden State’s 57-25 mark, giving Toronto home-court advantage in the series

Game 2 of the best-of-seven series is Sunday in Toronto before the teams head to Oakland for Games 3 and 4 next week.

-Rapper and global ambassador for the Raptors Drake, who was asked by the NBA to tone down his courtside antics, which included massaging Nurse’s shoulders, showed up in a signed Dell Curry Raptors jersey.

-Game 1 aired in 215 countries, three Canadian networks will air the series live (one of them in French), and broadcasters speaking in 50 different languages will work the games There are six networks from Australia, Estonia, Hong Kong and New Zealand airing the finals for the first time -Between the first and second quarter, Toronto brought Raptors alum Isiah Thomas, Muggsy Bogues, Charles Oakley, Jerome Williams, Dell Curry, Tracy McGrady, Mo Pete, Chris Bosh, and Damon Stoudamire onto the court -Golden State is in its fifth consecutive NBA Finals, which makes the second-longest such streak in NBA history, only to Boston’s run of 10 consecutive appearances from 1957 through 1966 They’ve won the championship three out of the previous four years

-According to several online ticket agencies, it was the most expensive Game 1 in NBA history.

The average resale price was about US$1,360, almost double the average price of last season’s Game 1 between the Warriors and Cleveland Cavaliers

— With files from The Canadian Press Get daily local headlines and alerts © 2019 Global News, a division of Corus Entertainment Inc.