With the Miami Heat needing to bounce back following a tough Game 3 defeat to the Boston Celtics, the team got a special performance out of a not-that-expected source.

That’s not to say it’s totally shocking to see Tyler Herro go off, as he’s had multiple impressive scoring outbursts already this year, but for him to set a career-high by dropping 37 points in one of the most important games of the season is outrageous and speaks to what a special talent Miami has in the confident bucket-getter.

Not only was the performance stunning from an individual perspective, but it was actually historically special, as, at 20 years and 247 days old, Herro became the youngest player in NBA history to score at least 37 points in a playoff game. 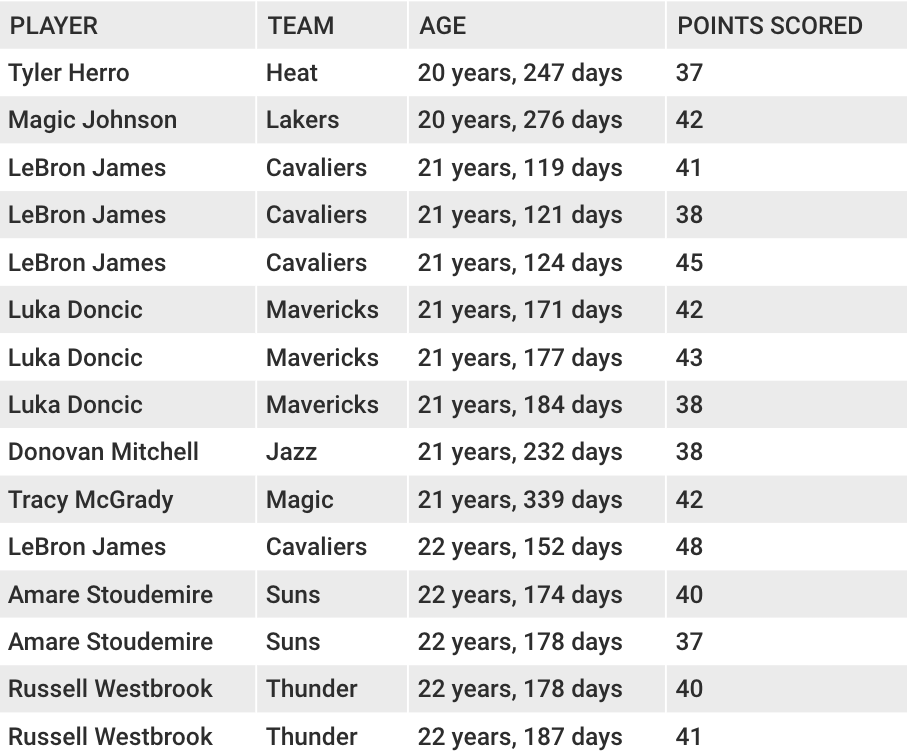 Topping two legends in Magic Johnson and LeBron James, Herro placed himself in absolutely elite company with his performance on Wednesday night, one that will be talked about for years to come as his career continues to progress.

Magic’s 42-point game as a 20-year-old will always be the standard-bearer for awesome playoff performances put on by a young player, particularly since it came in Game 6 of the 1980 Finals and was the closeout win for his first NBA championship, but Herro makes a strong argument for having the second-most important playoff performance by a player 21-or-younger, stakes-wise, since he did it in the Eastern Conference Finals.

From the chart above, only LeBron and Amare Stoudemire can claim to have had their scoring explosions in a Conference Finals as Herro did, but they were both 22 by the time they did it, while Herro is a 20-year-old rookie.

In fact, Herro is the first rookie since Kareem Abdul-Jabbar in 1970, a half-century ago, to drop at least 37 points in a Conference/Division Finals game. (The final four teams left each season used to face off in Division Finals, not Conference Finals.) And Abdul-Jabbar was already 23 by that point and playing in an NBA that was slightly watered down in talent due to the existence of the ABA.

Herro is also the only player besides Magic Johnson with at least 25 points in a Conference or NBA Finals game before turning 21.

We could go on and on about Herro’s big night, like mentioning that his 37 points gave him the second-best playoff scoring performance for a rookie since 1987 or that his 37 trail only Magic’s 42 as the best postseason scoring outing for a player under 21 years old, but what’s most noteworthy for Herro is that it came in an enormous win for his team, one that has the Heat one victory from reaching the NBA Finals in a campaign where no one had them predicted to make it that far.

They can partially thank their big-time rookie for that.