With Miami up 99-92 over Milwaukee with 18.8 seconds left, television cameras showed an injured Giannis Antetokounmpo staring at the court blankly and Khris Middleton scratching his beard wondering what just happened?

A season that began with title expectations went up in flames thanks to the Heat.

Now, the Bucks face several questions heading into the offseason. Will Antetokounmpo accept an extension offer? What does Milwaukee do if he doesn’t sign an extension? Can Mike Budenholzer get this team over the hump to win the East and a championship next season? How can the roster be improved to topple Miami, Boston, Toronto, and other contenders in the East?

HoopsHype spoke with two general managers, two executives and one scout on the condition of anonymity to get their takes on the future of the Bucks and answer those questions. 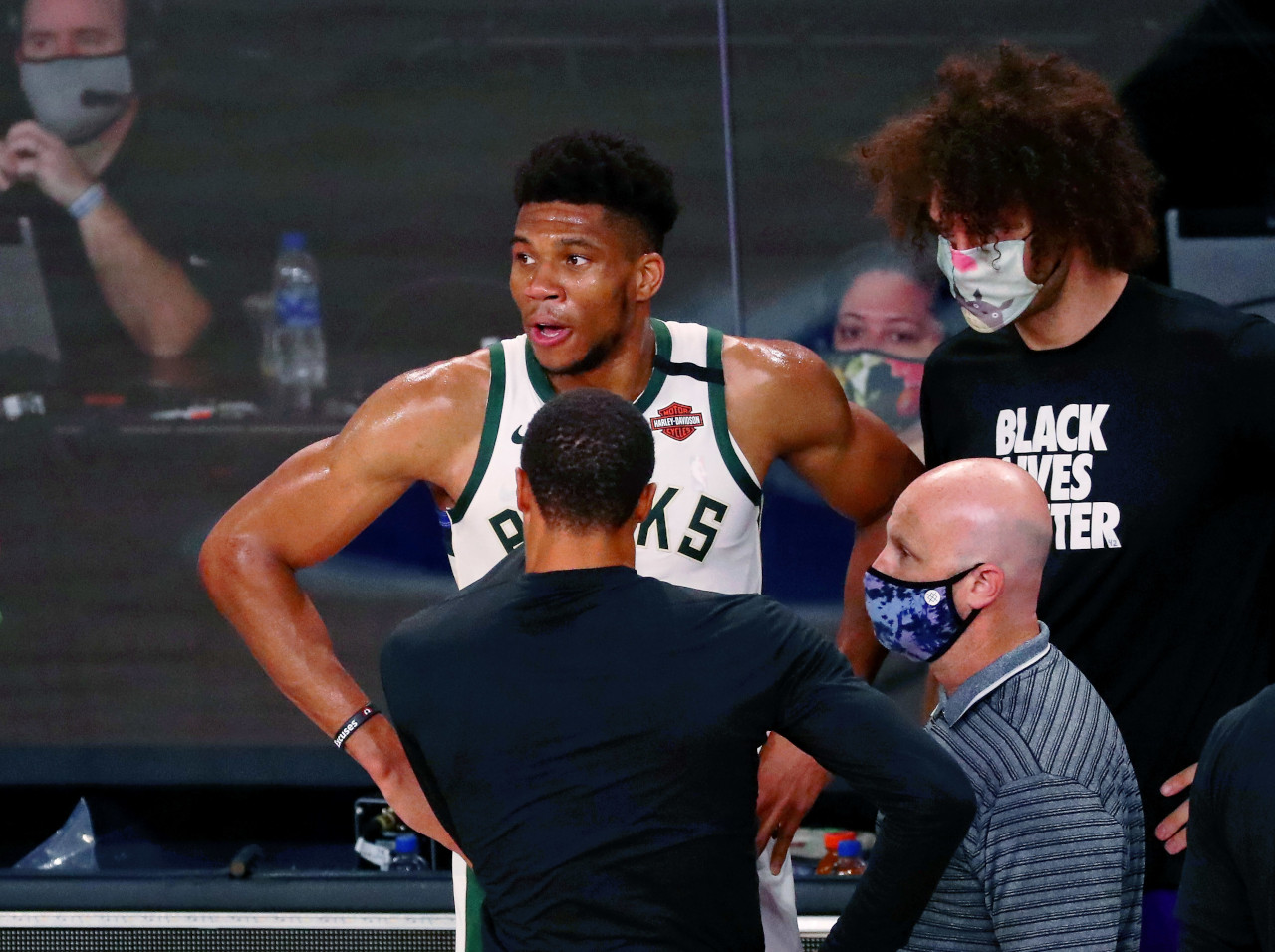 Antetokounmpo sounded like a man who is committed to remaining in Milwaukee for the foreseeable future based on his comments following the Game 5 loss.

“Hopefully, we can learn from this and get better as a team and come back,” Antetokounmpo said. “Hopefully, we can build a culture in Milwaukee, that for many years we can come out and compete every single year for a championship.”

Next season, Antetokounmpo is owed $27.5 million according to our Bucks salary page. Milwaukee can offer Antetokounmpo a five-year, $222 million super-max extension. Any other team is limited to only a four-year, $141 million offer when he enters unrestricted free agency in 2021.

While Antetokounmpo has always praised the organization, expressed trust in his teammates, and showed a visible presence in the community, there will be a defining moment when he’s offered the super-max extension soon.

If he signs the extension, the Bucks will breathe a sigh of relief and lock up the reigning MVP through the prime of his career, giving the organization more time to build a championship supporting cast around him.

If he doesn’t sign an extension, Milwaukee must decide if it’s willing to go all-in and sacrifice young players and draft picks to improve the supporting cast in the short term or trade him before potentially losing him for nothing.

“I’d want him to be honest,” an Eastern Conference general manager told HoopsHype when asked what he would do if Antetokounmpo didn’t sign an extension. “Are you not taking the extension because you don’t want to be here? Are you keeping your options open? I’d keep him because you have as good a chance to win next year as anyone. That’s why we all are in this thing. If things are not going your way by the trade deadline, then it’s a different story.”

Milwaukee has never been a traditional free agency destination, and the Bucks won’t get equal value back for the reigning MVP in a trade. To land a player of Antetokounmpo’s caliber is rare, and having failed to win a title since 1971, many around the league believe the Bucks won’t move their Greek star.

Despite Milwaukee ending the regular season with the league’s best record and Antetokounmpo on his way to a consecutive MVP season, speculation regarding his 2021 free agency buzzed. It’s the league’s worst-kept secret that Miami hopes to make a run at Antetokounmpo if he becomes a free agent. Toronto has also been linked as a potential suitor for the 25-year-old forward.

As a result, one gambling website recently adjusted its odds on his next team.

“At least it’s not like Anthony Davis or Kawhi Leonard,” an Eastern Conference scout told HoopsHype. “I still don’t believe the Miami and Toronto rumors just yet.” 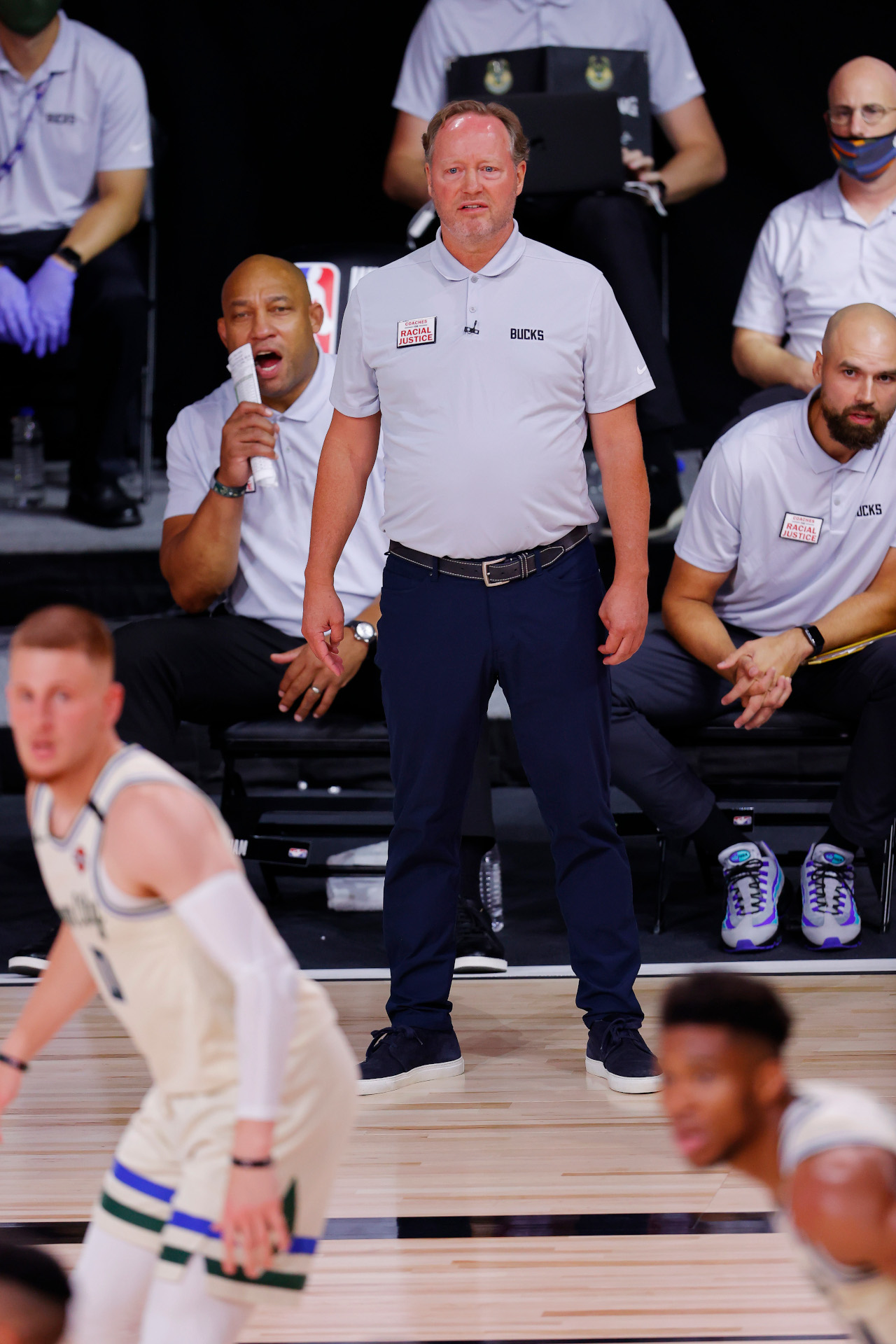 Budenholzer became emotional as he reflected on Milwaukee’s short-lived time in the bubble, which included the team boycotting Game 5 against the Orlando Magic in the first round before eventually returning to play.

“I think what the team stands for, and I think the character and humanity to stand and be on the right side of history like we did led by George (Hill) and Sterling (Brown), was emotional,” Budenholzer said following the Game 5 loss. “It’s such a great group. I think winning’s important. We had high expectations starting the season, throughout the season, coming here. You always want to realize those expectations, but the relationships, the character of this group. I think it’d be great if we could have both, but I think if you’re going to choose one, I’d like to be with guys that are high character and stand for something.”

Against Miami, Budenholzer was questioned for not playing Antetokounmpo and Middleton more minutes until the Bucks faced elimination. His rotation also relied on veterans Marvin Williams and Wes Matthews while he decreased the minutes of Donte DiVincenzo at the start of the series and benched Ersan Ilyasova and Robin Lopez for the entire series against Miami.

“I don’t understand all the Bud hate,” the Eastern Conference general manager told HoopsHype. “They were underachieving with Jason Kidd. Bud gets there, and then they become the NBA’s best team in the regular season. I get where people say he doesn’t adjust in the playoffs. They were up 2-0 on the champs last year before losing.”

Despite the criticism for Budenholzer after an underwhelming playoff performance for the Bucks in the bubble, other talent evaluators agree with the general manager above and support him returning next season.

“Milwaukee was the best team in the league before the lockdown,” an Eastern Conference executive told HoopsHype. “I think what happens in the bubble is too out of the norm to make any decisions on yet.”

“It’s not his fault,” another Eastern Conference executive added. “He definitely doesn’t adjust, but what could he have done? Play Sterling Brown more? Matthews is, at best, a situational player.”

The biggest supporter Budenholzer has going for him is Antetokounmpo, who has always praised his head coach. In a league where star players dictate the fate of coaches more than ever, that should go a long way towards his return. 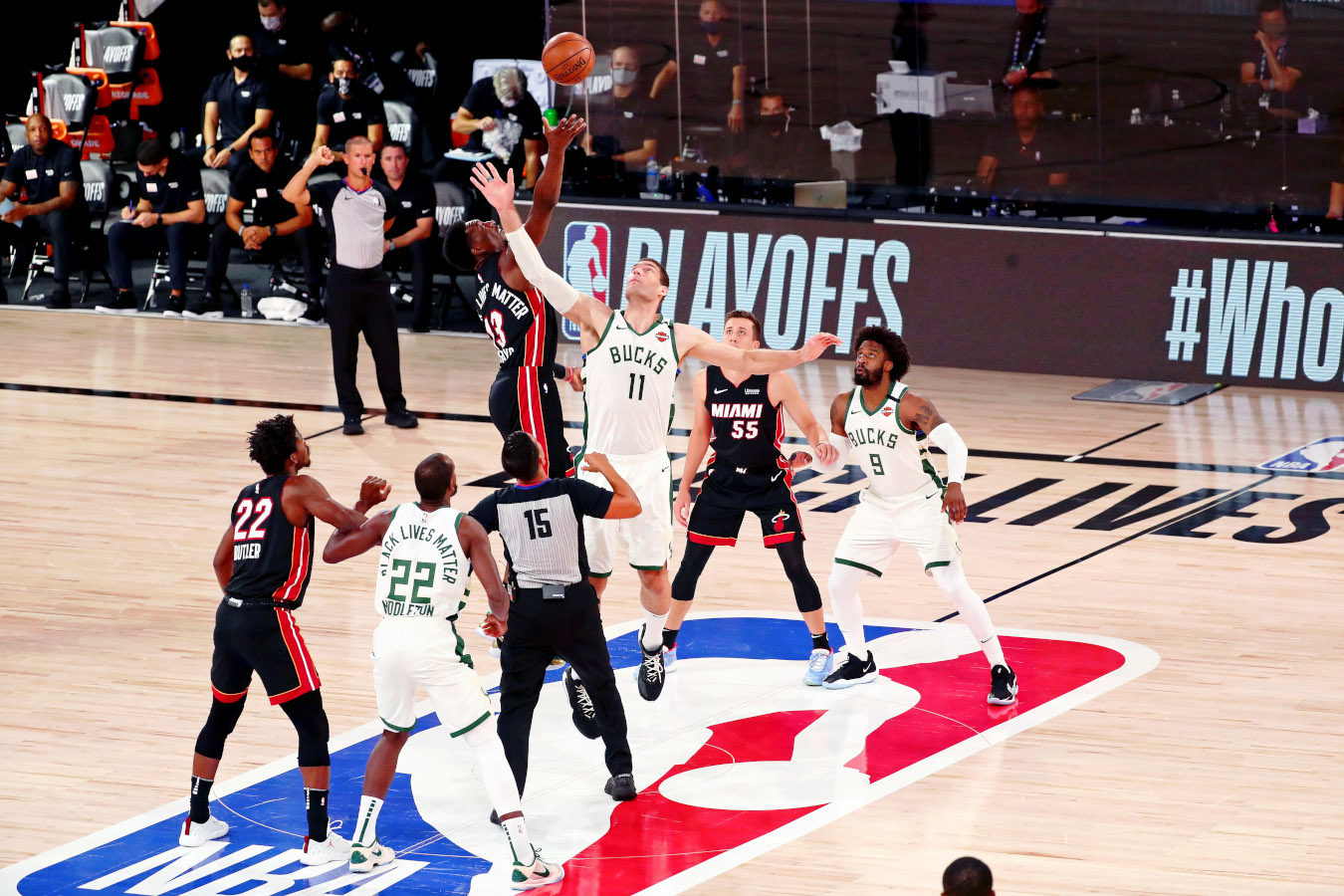 Milwaukee’s core of Antetokounmpo, Middleton, Brook Lopez, Eric Bledsoe, Hill and DiVincenzo are all signed for next season.

“I think they’re good enough to win,” the Eastern Conference general manager told HoopsHype. “We definitely overreact to certain things. They’re a contending championship team. It’s like OKC back in the day. Play it out. If Giannis leaves, he leaves. His brother is on the team, for crying out loud.”

Offensively, if the MVP can improve a glaring weakness in his game, multiple talent evaluators believe the Bucks will be able to get over the hump and reach the Finals.

“I think it’s hard to put too much stock in it because of the circumstances,” another Eastern Conference executive told HoopsHype. “If it were my decision, I think you run it back next year with the same squad. I think over the summer, Giannis will learn to extend past the 3-point line consistently. Then, if things aren’t looking good at the deadline next year, you see what you can get for Middleton, Bledsoe, DiVincenzo. I think they should look at a guy like CJ McCollum. Miami is f—— good. People sleep on how good of a teammate Jimmy Butler is when he’s surrounded with guys that work hard.”

“Giannis needs to take a jump as a shooter,” the Eastern Conference scout told HoopsHype. “Some guys work hard, and it never pays off. They need that third guy. Who is that third guy? They need guys who are more multidimensional than shooters. Get tougher guys.”

Barring a trade, Bledsoe or Lopez will vie to be the team’s consistent third scoring option. There will also be some bench spots that need to be filled. Williams retired following Game 5, and Kyle Korver will consult with his family to determine if he’ll play again next season, according to The Undefeated. Ilyasova’s $7 million salary is non-guaranteed, Brown is eligible for a $2 million qualifying offer, and Robin Lopez and Matthews both have player options.

“Once you pay one or two guys significant money, it’s hard to build around them,” one Western Conference general manager told HoopsHype. “When you have a guy on a rookie scale deal, it’s much easier. The superstars are just paid an exorbitant amount of money.”

With the Bucks expected to be over the cap, Milwaukee will need to probe the market for cheaper veterans trying to chase a ring or take a flyer on a player who is looking to reinvigorate his value by proving himself on a short-term deal.