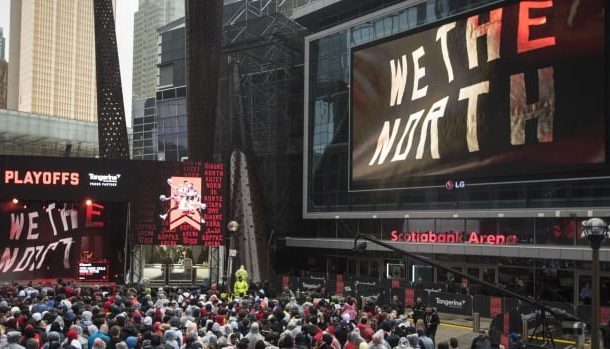 The Gotzis decathlon in Austria is a storied annual event, but another sporting topic kept popping up at the track this week

Seems the hotly contested NBA Eastern Conference final between the Toronto Raptors and the Milwaukee Bucks is generating a bit of trash talk overseas heading into this weekend's event.

next year," Gar Leyshon, the coach of Canadian Olympic bronze medallist Damian Warner and a former high school basketball coach, wrote in a text message to The Canadian Press on Friday.

"We are paying close attention, and a surprising number of athletes here are watching, too My 80-year-old mother emails me updates (she is a huge Raps fan and calls all the players by their first names!) and I have made Damian into a Raptors fan this year

" In sporting arenas around the world, Canadian athletes are talking proud about the Raptors, who have a chance to advance to the NBA finals for the first time in team history with a win in Game 6 on Saturday at Scotiabank Arena in Toronto.

Star sprinter Andre De Grasse of Markham, Ont, woke up in the morning at his hotel room in Taipei, Taiwan, to watch the visiting Raptors win Game 5 to take a 3-2 series lead "I was nervous watching the game, because we came back and we started missing free throws down the stretch in the fourth quarter, but I'm happy we pulled it out," he said "Big game from Kawhi and (Fred) VanVleet We got to close out in Game 6 and protect home court and don't let it go back to Milwaukee One win from the NBA finals, that's crazy WATCH | Leonard leads Raptors to Game 5 win over Bucks: Kawhi Leonard's 35-point performance has the Raptors one win away from the NBA finals after beating Milwaukee 105-99 on Thursday 2:05 In Slovakia, another Canadian sporting star this week is cheering for the Raptors Defenceman Damon Severson, who scored the tying goal for Canada with 04 seconds left in regulation in an eventual quarter-final win over Switzerland at the world hockey championship on Thursday, says discussion often shifts to basketball during down time "The time change is a little difficult, but the next morning, that's kind of a topic of conversation," said the native of Melville, Sask "We're all Canadian That's Canada's basketball team, we all support the Raptors Kawhi Leonard has been pretty amazing and for them to go ahead 3-2 the other night in Milwaukee was pretty cool" WATCH | Jurassic Park is the place to be as Raptors chase history: CBC's Devin Heroux talks to Raptors fans to find out why the best place to watch their team play is outside the stadium 3:36 In France, Montreal teen tennis star Felix Auger-Aliassime broke into a grin when asked about the Raptors after his win in a Lyon Open semifinal on Friday

The 18-year-old is trying to find time to watch the Raptors while gearing up for the French Open, which starts Sunday in Paris.

"I'm following them quite a bit," he said "I was pretty happy this morning to find out they won (Game 5)

It's fun that a Canadian team is so good at basketball.

" Raptors head home with chance to make history MEN'S WORLDS Improving Canadian team comes together at last, right moment to reach semifinals Another Canadian athlete preparing for a huge event in his sport is also finding ways to keep tabs on the Raptors Auto racer James Hinchcliffe of Oakville, Ont, who will compete in Sunday's Indianapolis 500, plans to watch Game 6

"Been following the playoffs closely," he said.

"It sucked to lose Game 1 that way, but to go on the streak they're on, heading into what could be the game to get them in the finals, is awesome Momentum is huge in these series, so we'll be cheering loudly in Game 6" Across Canada, the reaction is much the same

Decathlete Damian Warner is confident the Raptors will win the Eastern Conference final and advance to the NBA championship.

"I'm competing in Austria this weekend, so I won't be able to see the Raptors close out the Bucks," he said.

"But we'll be home in time to see Game 1 of the Toronto-Golden State final" Halifax Mooseheads forward Samuel Asselin is celebrating more than just his goals at the Memorial Cup The captain and his teammates were sure to watch the Raptors beat the Bucks in Game 5 on Thursday (Darren Calabrese/Canadian Press) With files from Lori Ewing in Milwaukee, Gregory Strong in Toronto, Gemma Karstens-Smith in Vancouver, Kyle Cicerella in Halifax, Stephanie Myles in Lyon, France, Carol Schram in Bratislava, Slovakia, and The Associated Press in Indianapolis