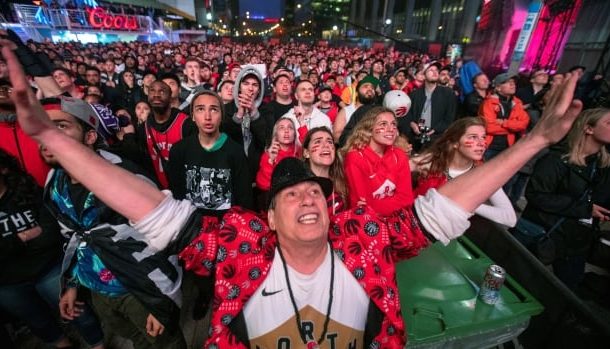 The Toronto Raptors finally did it — they're heading to the NBA Finals for the first time in franchise history In front of the 233rd-straight sellout at Scotiabank Arena, a wild and raucous crowd, the Raps finally broke through They beat the Milwaukee Bucks four-straight times, including Saturday night's Game 6, to clinch the Eastern Conference finals The victory sent Toronto sports fans into a jubilant frenzy They spilled out of Scotiabank Arena after the game, joining a celebratory wave of thousands more in Jurassic Park and in downtown city streets, dancing, chanting and cheering WATCH | Raptors defeat Bucks in Game 6 to reach NBA Finals: Kawhi Leonard was magical in Game 6, finishing with 27 points and 17 boards as the Raptors beat the Bucks 100-94 to reach the NBA Finals for the 1st time in franchise history 2:56 Because this win, this Raptors 2019 playoff journey, is now the new point of reference for memorable Raptors history Everything until now surrounding this team's past has been about missed chances, missed shots and teams or players not living up to expectations — or leaving the city It wasn't easy Saturday night The Raptors found themselves down 50-43 at halftime By midway through the third quarter, Milwaukee had increased their lead to as much as 13 But that's when the game changed

What people are saying about the 1st Raptors NBA Finals appearance GAME 6 Resilient Raptors rally past Bucks to reach 1st NBA Finals in franchise history By the end of the third quarter, Toronto cut the Bucks lead to five setting up a dramatic finish.

This is Toronto #WeTheNorth @cbcsports @CBCToronto pictwittercom/NjCclBhEYL — @Devin_Heroux A thunderous Kawhi Leonard slam with 6:46 remaining, soaring over Giannis Antetokounmpoto, put the Raps up by eight points and sent the crowd into a frenzy They'd seal the victory late in the game and defeat Milwaukee, 100-94

Past heartbreak leads to this euphoric moment This historic win comes almost exactly 25 years ago to the day the franchise team name was revealed.

. In front of a national TV audience, the name "Raptors" was unveiled to Canadians It wasn't long after that those purple, silver, red and black jerseys, complete with that less-than threatening dinosaur logo, was also introduced to basketball-hungry fans WATCH | Revelry in downtown Toronto: Toronto was a sea of red, white and Drake signs after the Raptors made history with their Game 6 victory over the Milwaukee Bucks 1:33 The local love affair with the beloved Raps began And so too did years of basketball misery Despite winning their first game in franchise history, a 94–79 victory over the New Jersey Nets, the inaugural season was a disaster The team finished with a 21-61 record The losses piled up in the years that followed, inside the uninspired atmosphere at the SkyDome

DRAKE HEADS #WeTheNorth pictwittercom/tf6yHMpH0O — @Devin_Heroux Then came the move to the Air Canada Centre — and the Vinsanity era grabbed hold of the city For the first time in team history they had a superstar, Vince Carter, and that's when fans finally had something to believe in Carter sparked a generation of basketball dreams that rippled across the country Then came the miss April 2001, Carter missed a shot against Philadelphia in Game 7 that would have sent the Raptors to the Eastern Conference finals — it would have been against the Bucks that year too Some are wiping tears from their eyes

Kawhi's shot, against Philadelphia in Game 7 this year, erased so much of that haunting memory.

And then there has been these past number of years

Since 2014, it has been a Raptors renaissance in Toronto.

Fifty-win seasons have been the norm, franchise records continue to get set, and fans expect regular-season success Raptors fandom goes global as Canadian athletes cheer Toronto team Why everyone should chill out about Drake's courtside antics at Raptors games The playoffs have been a different story — a 2014 Game 7 loss at home to the Brooklyn Nets Being swept out of the playoffs in the first round against the Washington Wizards a year later Then came the Cleveland Cavaliers and LeBron James The Raps' nemesis LeBron and the Cavs bounced Toronto from the playoffs three consecutive seasons Would this team ever find a way back from that? Giving it all up for Kawhi Last summer in the span of weeks franchise player DeMar DeRozan, Mr Toronto, was traded away to San Antonio for Kawhi Leonard Coach of the year Dwane Casey was also shipped out of the city It all came after a franchise-best 59-win regular season and an off-season that saw their long-time kryptonite LeBron James leave for the Western Conference

Drake's courtside trolling has Milwaukee fans up in arms And Kawhi Leonard was a big question as concerns over his health continued to swirl.

Kawhi Leonard hoists the trophy after the Raptors won the Eastern Conference Final (Frank Gunn/The Canadian Press) To say there was frustration in Toronto over the controversial moves is an understatement Raptors president Masai Ujiri was unapologetic about it all – he knew something had to change and risked a lot "That's why we play sports, is to compete for championships We have been doing this for how many years? You can't keep doing the same thing over and over At this point, we got to the level where this opportunity came to us, and we had to jump on it," Ujiri said in his first press conference after trading away DeRozan for Leonard WATCH | How some fans reacted to the win: Fans of the Toronto Raptors went wild at Yonge and Dundas streets after Saturday's victory over Milwaukee 0:16 Kawhi Leonard is having one of the best playoff performances ever He's led Toronto to the NBA Finals and has provided Raps fans memories for a lifetime in the process Leonard's been here before

In 2014, he won an NBA championship with the Spurs and was named the Finals MVP.

Kyle Lowry's injured thumb will be constant companion for rest of playoffs The Raptors are competing for the championship, just like Ujiri imagined when he made these moves And they have Kawhi, who's been there and done that "Experience helps a lot," he said "I've been here before You just have to have fun out there I told them to enjoy the moment and embrace it, and let's have fun and love it This is why we're here" The Raptors have finally arrived