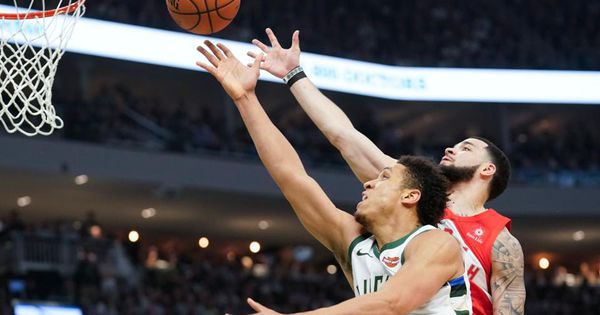 Next to Toronto Raptors superstar Kawhi Leonard, Fred VanVleet has suddenly become the most important story of these Eastern Conference Finals In Thursday's 105-99 Game 5 victory over the Bucks in Milwaukee, this super-sub followed up his 13-point effort in the previous game with a dazzling 21-point performance, becoming the first player in Raptors' franchise history to make seven or more three-pointers off the bench These breakout performances have come only days after the birth of his son, Fred Jr, which perhaps can be explained this way: His mind is now clear, so he can now concentrate fully on basketball and he is able to play loose Whether it was a coincidence or not, these game-changing performances packed into one incredible week off the court had him in a playful mood after Game 5 when he was asked about it by TSN's Kate Beirness "I'm not giving him no credit," VanVleet said with a sly smile

You know, it's all the hard work that I've been putting in Obviously to have a big life help to clear your mind up a bit gives you a little bit of extra motivation as well

" Later, when asked for his formula, he replied: "Zero sleep, have a lot of babies, and go out there and let loose.

" VanVleet spent the night at home in Rockford, Illinois with his girlfriend & their newborn son, Fred Jr He made the 90-min drive to Milwaukee this morning, got in around noon and squeezed in a quick nap Hasn’t had much sleep, but said the emotional high is carrying him through — Josh Lewenberg (@JLew1050) May 24, 2019 Ahead of Tuesday's Game 4 in Toronto, VanVleet had traveled to Rockford to be with his girlfriend for the birth of their son on Monday Then following the win, VanVleet flew to Milwaukee to be with the team He then drove about 100 miles to Rockford, Illinois, where he stayed with the family overnight, and then drove back to Milwaukee on game day, with just enough time to catch a quick pre-game nap After VanVleet delivered the best two-game playoff performance of his career during such a whirlwind week, Kyle Lowry had nothing but praise for his teammate "To come out with a performance like that on the road it shows the mental toughness, it shows just how much of a professional he is," Lowry said "It was an unbelievable performance by him He made some big shots for us and he did his job tonight" Prior to the baby's birth, VanVleet was clearly off his game, going 1-of-11 in Toronto’s double-overtime win in Game 3, and questions were being raised about whether he should be benched But VanVleet's quick rebound has changed the conversation Now there seems to be a case for coach Nick Nurse to not only keep him in the playoff rotation, but to keep him fully engaged with 35 or even 40 minutes of playing time as Toronto tries to close out the series on Saturday at home and advance to the NBA Finals for the first time in franchise history VanVleet has also become a big story for all that he has overcome in his life to get this far and how this sometimes underappreciated 25-year-old managed to win a Raptors job as an undrafted free agent in 2016 and get rewarded last year with a two-year contract worth $18 million

Following are 13 facts you should know about VanVleet's incredible journey to get to this stage and why he has earned the respect of his teammates by taking on huge minutes with very little sleep after welcoming a newborn into the world.

VanVleet was born in Rockford, Ill.

, a city about 90 miles northwest of Chicago, on Feb 25, 1994, which was a year before the Raptors were born VanVleet's father, Fred Manning, was shot to death in a 1999 drug deal when VanVleet was 5 VanVleet's stepfather, Joe Danforth, a veteran police officer, and mother, Susan VanVleet, steered him out of trouble by getting him up at 5 am to attend basketball drills and workouts VanVleet was a bright student in middle school, but he wanted to be taken out of the gifted program because he didn't want to be known as the smart kid VanVleet admits he was a jerk to his teammates early in his high school career, often telling them they sucked He told the Wichita Eagle that his father straightened him out VanVleet's stepfather, who had boxed in the Army, taught Fred ball-handling skills when he was only 9 or 10 and later worked on his conditioning by making him wear 30-pound weighted vests In the sixth grade, VanVleet played for an elite team based in Chicago that was coached by former NBA player, Antonio Davis VanVleet was a gifted high school player in Rockford but he was underestimated by college coaches At one point, VanVleet attracted the attention of Bruce Weber, then coach of Southern Illinois, who visited Auburn High School once But the recruitment ended there and VanVleet still doesn't know why

VanVleet instead chose Wichita State, where he contributed to a resurgence of the basketball program.

D, earned basketball scholarships, but Fred always showed the most potential VanVleet was signed by the Raptors as an undrafted free agent in 2016 and signed a two-year contract for an average salary of $724,360 In his second year with Toronto, VanVleet showed the club what he was made of after he fell into a shooting funk and even struggled making layups Dan Tolzman, Raptors assistant GM and vice-president of player personnel, noticed that VanVleet never seemed to get down on himself “You’d never know he was in a big slump,” Tolzman told Sportsnet's Michael Grange “He was the exact same guy" As it turned out, the slump was short-lived On the Raptors, VanVleet is not the most athletic player, but he might be the most tenacious "I'm not the most amazing athlete -- I understand that," he once told Sportsnet "But my character, my IQ, the way I think the game

Those are my things.

" Despite his earlier struggles coming off the bench this postseason, perhaps coach Nick Nurse should ride the hot hand and give him Kyle Lowry-type minutes, perhaps even up to 40 minutes, on Saturday.

In addition to his breakout shooting performances, his defense has been rock-solid, and his ability to play at a high tempo has thrown the Bucks off their game