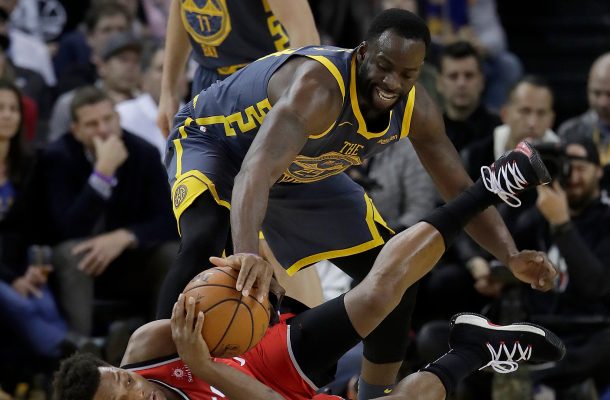 How Warriors-Raptors coin toss brought Draymond Green to Golden State How Warriors-Raptors coin toss brought Draymond Green to Golden State By Brian Witt May 28, 2019 4:50 PM Seven years ago, the idea that the Warriors and Raptors would face off for the NBA championship seemed downright laughable But it was in May of 2012 that Golden State and Toronto went head-to-head in a game of chance that had a drastic impact on the Warriors' ongoing dynasty 2012 was the last time the Warriors failed to make the playoffs, as they finished the lockout-shortened season with a record of 23-43 -- tied with the Raptors for the seventh-worst record in the league Golden State lost 17 of its final 20 games, and 10 of its final 11, in a tanking effort that would prove to be just barely enough The Warriors' first-round pick in the 2012 draft was top-seven protected and would be sent to Utah if it had fallen outside the first seven selections With Golden State and Toronto possessing identical 23-43 records, a coin toss was held to determine which team would be slotted seventh going into the lottery drawing, and which would be eighth The Warriors won the coin toss, and ultimately kept their first-round pick The rest is history In the six-plus seasons since, the Warriors have qualified for the playoffs seven times, made five consecutive NBA Finals, won three championships, and currently sit four victories away from attaining their fourth -- and third in a row If that coin lands the other way, there's a strong chance Draymond Green -- who was acquired in that same 2012 draft -- never ends up in a Warriors uniform And without Green, there's likely no dynasty to speak of With the No7 overall selection in 2012, the Warriors took small forward Harrison Barnes out of UNC.

They then used the No

30 overall selection on center Festus Ezeli and chose Green with the No.

35 overall selection in the second round The Warriors had significant needs at both the "three" and the "five" positions, with very little in the way of quality depth at the small forward and center positions If the Warriors lost that coin toss and subsequently lost the top-seven protected pick, it's unlikely they would have been in a position to use the two latter selections in the same manner that they did Green was somewhat of a luxury selection, and one Golden State probably wouldn't have been able to afford without first benefitting from lady luck After playing a limited role in his first two seasons, Green assumed the injured David Lee's spot in the starting lineup, and he's never looked back Green has started every game in which he's appeared for Golden State since the start of the 2014-15 season, amassing five All-Defensive, three All-Star and two All-NBA designations, and one Defensive Player of the Year award in that time [RELATED: Warriors have storied history with refs officiating Finals ] There's no denying the impact Green has had on the Warriors' success, nor can you overstate his essentialness to the culture they've had in place since his arrival Just days away from Game 1 of the 2019 NBA Finals, he will undoubtedly have to play a major role against Kawhi Leonard and the Raptors if Golden State is to secure its third straight championship It's bound to be a neck-and-neck series A coin flip, you might say That worked out pretty well for the Warriors the last time They're plenty good, but it doesn't hurt to be lucky, too Warriors stand to benefit from Kyle Lowry's thumb injury in NBA Finals Warriors stand to benefit from Kyle Lowry's thumb injury in NBA Finals By Brian Witt May 29, 2019 5:18 PM Kevin Durant's calf will keep him out of Game 1 of the NBA Finals, and quite possibly beyond DeMarcus Cousins is fervently trying to work his way back from a torn quad And let's not forget, Steph Curry dislocated his finger in the second round Yes, the Warriors have endured some significant injuries to some critical members of their team on their way to a fifth consecutive Finals berth, but when you play as many playoff games as they do, that's bound to happen And, they're not alone The Raptors have suffered their fair share of injuries to important players over the course of their path to the Finals Kawhi Leonard has been dealing with a knee injury , and was seen limping on multiple occasions during the Eastern Conference finals Swingman OG Anunoby, who was upgraded to questionable for Game 1 , has yet to appear in the postseason after undergoing an appendectomy And, on Wednesday at Finals Media Day, point guard Kyle Lowry gave an update on his banged-up thumb During a segment on ESPN's "The Jump" with Rachel Nichols and Tracy McGrady, Lowry clued viewers in on just how significant an injury it is "During the game, I can't feel my thumb," Lowry said Kyle Lowry talks about how his passing is affected by his thumb injury pictwittercom/rrxxUdwulS — NBA on ESPN (@ESPNNBA) May 29, 2019 Lowry originally suffered the injury in Game 7 of the second round against the 76ers Lowry says his thumb popped out, he popped it back in "Doesn't matter, I'm fine, I played, we won the game" — Blake Murphy (@BlakeMurphyODC) May 13, 2019 While he clearly didn't want to make his injury a focus, Lowry is quite possibly the second most important player to the Raptors' success, and if he's hampered by his thumb in any way, that could have a drastic impact on the outcome of the series [RELATED: Cousins 'pain free,' still questionable for Finals Game 1 ] Of course, the Warriors aren't about to feel sorry for Lowry and the Raptors Not with what they're dealing with at the moment 2019 NBA Finals: How Warriors should use DeMarcus Cousins vs

Raptors 2019 NBA Finals: How Warriors should use DeMarcus Cousins vs.

Raptors TORONTO – It is become apparent that the Warriors have a crucial decision to make, maybe as soon as Thursday, and that they’ll have to proceed with extreme skill throughout the process What to do with DeMarcus Cousins? Cousins was the starting center until he went down with a torn left quadriceps muscle on April 15 in the first round of the NBA playoffs Six weeks later, with the NBA Finals on deck, he says he’s “healed for the most part” and clearly is anxious to play Coach Steve Kerr says Boogie is pain-free but also that many other factors must be weighed before reaching a decision on when and how to use the most skilled center on the roster “If this were the regular season, I would throw him out there and he would play whatever minutes he could tolerate and we would build him up from there,” Kerr said Wednesday

“This is not the regular season.

“This is The Finals, so we have to figure out what's the best way to utilize him, how many minutes can he play, what the game feels like, what the matchups are like Some of that will be determined by what's happening in the game, and the other stuff is just internal with our staff” It would be risky to put Cousins in the starting lineup immediately after such a long layoff He is listed as questionable for Game 1 It might be risky, with so much on the line, to put Cousins on the floor at all But it would be a waste of his gifts to restrict him to the bench and lean solely on the centers utilized in his absence Kerr has manned the position with five different players, from Andrew Bogut and Kevon Looney, to Jordan Bell and Damian Jones, with Draymond Green also sliding over from power forward Nobody on the team is closer to Cousins than is Green, who acknowledged that Boogie would have a lot to overcome “A h ge challenge,” he said “When you talk about DeMarcus, he's someone who's been great in this league for years now He's probably not played basketball what, 16 out of the last 19 months, so that right there alone is a challenge in itself Then you start to talk playoff experience, where you and I both know the intensity level is completely different than a regular-season game, and he doesn't have much playoff experience And then you get dropped in the NBA Finals? “It's kind of like some kid who grew up in the suburbs going to private school and then one day you just got dropped in the ‘hood and was told to survive You got to figure that out It's very similar to that

” An important part of the equation is Cousins’ desire to play.

He’s rehabbing regularly in an effort to participate in a Finals for the first time in his eight-year career If it were up to him, he’d be on the court for the opening tip Thursday night “That's the thing, it's never really up to me,” he said “We'll put our heads together and come up with the best plan moving forward” Asked about his readiness, Cousins was honest as usual ”That's hard to determine with most athletes,” he said “We're stubborn We're bullheaded

And that's not always the best case for the individual So obviously we'll come together and figure out the best plan for me” The best plan, at least at the start, would seem to be playing Cousins off the bench Evaluate his rhythm and fitness level in game conditions If he is effective, stay with that plan

If he is not, have a chat with the big man.

Which brings us back to Green’s “suburban kid in the ‘hood” analogy “You just revert to what you know You do whatever it is that you know,” Green said “You just try to do that to survive Well, one thing we do know is DeMarcus is a great basketball player So, at that point then you just go out there and you do what you're great at And everything else will fall in line

“You know that kid has a much better chance of surviving if he gets with the right group of friends in that neighborhood It's on us as his teammates to help pull him through, to get whatever we can out of him to help make us a better team and do whatever we can to put him in the best position to be successful” The Raptors are going to start Marc Gasol at center He’s 7-foot-1, 260 pounds Cousins is a reasonable physical matchup So, too, is Bogut Yet no Warriors center has been more effective this postseason than Looney, who is four inches shorter and 40 pounds lighter than Gasol [ RELATED: Warriors searching for championship defense ] If Cousins is physically cleared, he has to play He should play He must play But his every move should be studied If he’s productive, exhale and enjoy If he’s not, well, there are five other options