Donald Cerrone was caught off guard by the first question he received at UFC on ESPN+ 36 media day, but it ultimately allowed him to open up about where he currently stands in the sport.

Cerrone (36-15 MMA, 23-12 UFC) enters Saturday’s welterweight co-main event with Niko Price (14-4 MMA, 6-4 UFC), which takes place at UFC Apex in Las Vegas and streams on ESPN+, with a four-fight skid. It’s the longest run of losses in his career, and it’s prompted speculation about how much “Cowboy” has left.

The 37-year-old was asked about that possibility right away in his conversation with media members, and he said it’s been nowhere on his mind.

“Hell no,” Cerrone told reporters, including MMA Junkie, during Wednesday’s UFC on ESPN+ 36 virtual media day. “No. Not even in my train of thought. Wrong question.”

Cerrone is one of the most decorated fighters in UFC history, holding records in key categories such as wins, finishes, knockdowns and fight-night bonuses. Cerrone will be inducted into the UFC Hall of Fame one day, but he said that doesn’t necessarily make him feel comfortable.

Losses can’t go on forever, and Cerrone said he knows he’ll eventually have to get his hand raised inside the octagon. It’s his intention for that to happen against Price, though, and he hopes that affords him more time to fight more at the highest level before walking away on his own terms.

“I would like to say yeah (UFC will keep me forever), but also on the same breath, how many – I don’t even want to think about losing again because it could happen,” Cerrone said. “I’ve trained my ass off, I’m ready to rock and roll. I’m planning on being here for a long time. I’m going to leave when I’m done. I don’t ever want the walking papers. When ‘Cowboy’s’ done fighting, I’m going to bend my hat and I’m going to say, ‘All right boys, I’ve had enough. I’m out.’ I don’t ever want to have them call my manger and release me, that would totally suck. I’m going to keep fighting my ass off.”

Cerrone said he’s done everything in his power to change his fortunes. After toning down sparring significantly for recent fights, Cerrone said he turned in a lot of hard rounds during this camp.

It’s done wonders for his phycology, Cerrone said, and he hopes it translates into his performance.

“I feel like this camp made me fall back in love with why I’m doing this,” Cerrone said. “For sure. Am I ready? Yeah. Are we going to see a new ‘Cowboy?’ No. Same old bad, nasty mother(expletive) you’ve seen for years, he’s just going to come out a little earlier. That’s all.”

Not only is this a meaningful fight for Cerrone in terms of wins and losses, but he said it’s important for him personally. Cerrone said he’s looking at this bout against Price with a selfish perspective, and while he’s got a family to support (which includes a newborn son), he said he’s drowning out everything outside of himself.

“All the naysayers, all those people who say, ‘You’ve lost four in a row, you don’t belong you should be retired’ – I don’t give a (expletive),” Cerrone said. “I don’t care if I need to prove anything, I don’t need to prove something. This one’s just for me. I get to look myself in the mirror Saturday morning and go like, ‘Let’s go, baby.’ This is for you. I get to have all the fun I want with no expectations, no must-wins, no must-dos. No nothing. Just fight my fight and do what I do and love every second of it and have fun and enjoy it. That’s how I’m going to be victorious no matter how the fight goes for me. There’s no wrong way this fight can go.” 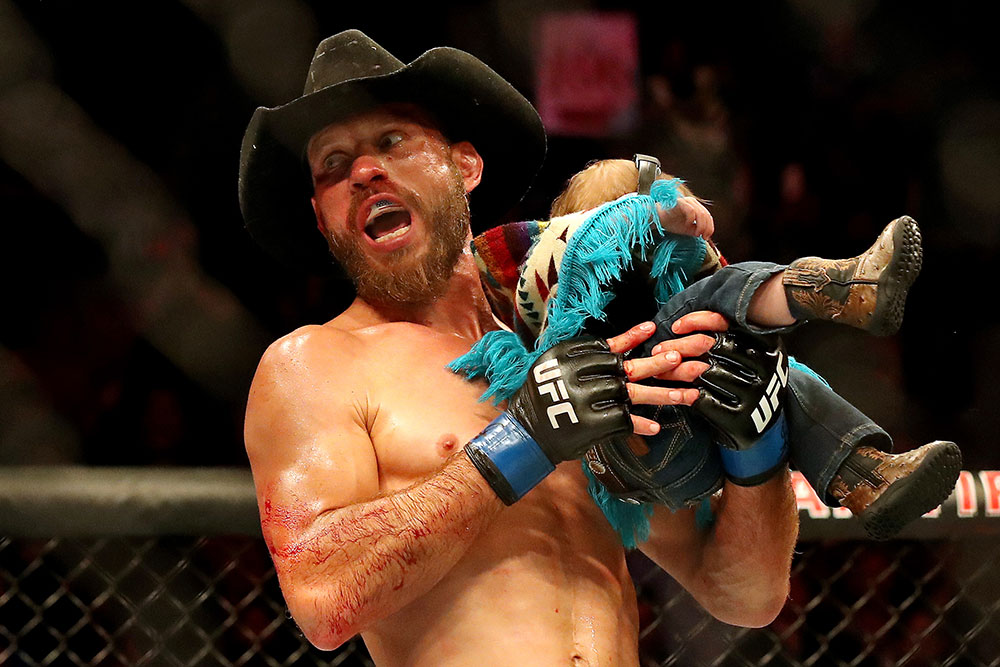