Led by Giannis Antetokounpo, who is questionable for Game 5, the Bucks were defined this season by their speed and how many more possessions they squeezed out than other teams in the league. But if there was any team in the NBA built to slow down the No. 1 seed in the East, it was Miami. Their bulldog defensive mentality, exemplified most by Jimmy Butler and Bam Adebayo, has created an unimaginable stretch for Milwaukee.

The Bucks needed just 10.9 seconds to get their shots off in the regular season, per InPredictable, which was the quickest among all teams in the East. Yet teams took 12.1 seconds per shot against the Heat, which was the slowest average in the league.

Bucks played only five regular season games at pace slower than 100 possessions per 48 minutes, and they posted a 2-3 record in those games. The Heat has made Bucks play at that slow pace in first two games of the series.

Can Miami do it again in Game 3? https://t.co/RTyztCY3mZ

Even though Milwaukee played at the fastest-pace (105.5) of all teams in the league during the regular season, their pace dropped (97.3) significantly in the series against Miami. Note that this pace was below average (100.3) for an NBA team in 2019-20.

This was concerning because, during their regular season, they finished in transition (18.5 percent) more often than any team in the league. This fell quite a bit during both the first game (12.2 percent) and second game (10.4 percent) of the series, getting the Bucks out of rhythm. This rate was also quite low (12.7 percent) in the sole game they have won.

Bucks’ All-Star Khris Middleton spoke about the impact this has had on his  (via Miami Herald):

“On the offensive end, we just gotta play with more tempo. The Heat is doing a great job of slowing us down and making us play a little bit more in the half court.”

Of course, this has had a drastic impact on the scoring of the series as well. In the regular season, via Synergy, Milwaukee averaged 25.4 points per game when finishing in transition. Yet they have scored just 16.3 points per game in the open court during the first four games of the Eastern Semifinals thus far.

In close games, this difference is enough to swing a typical victory for them into a loss. They have been outscored by 5.4 points per 100 possessions thus far, so the dropoff in scoring is significant. 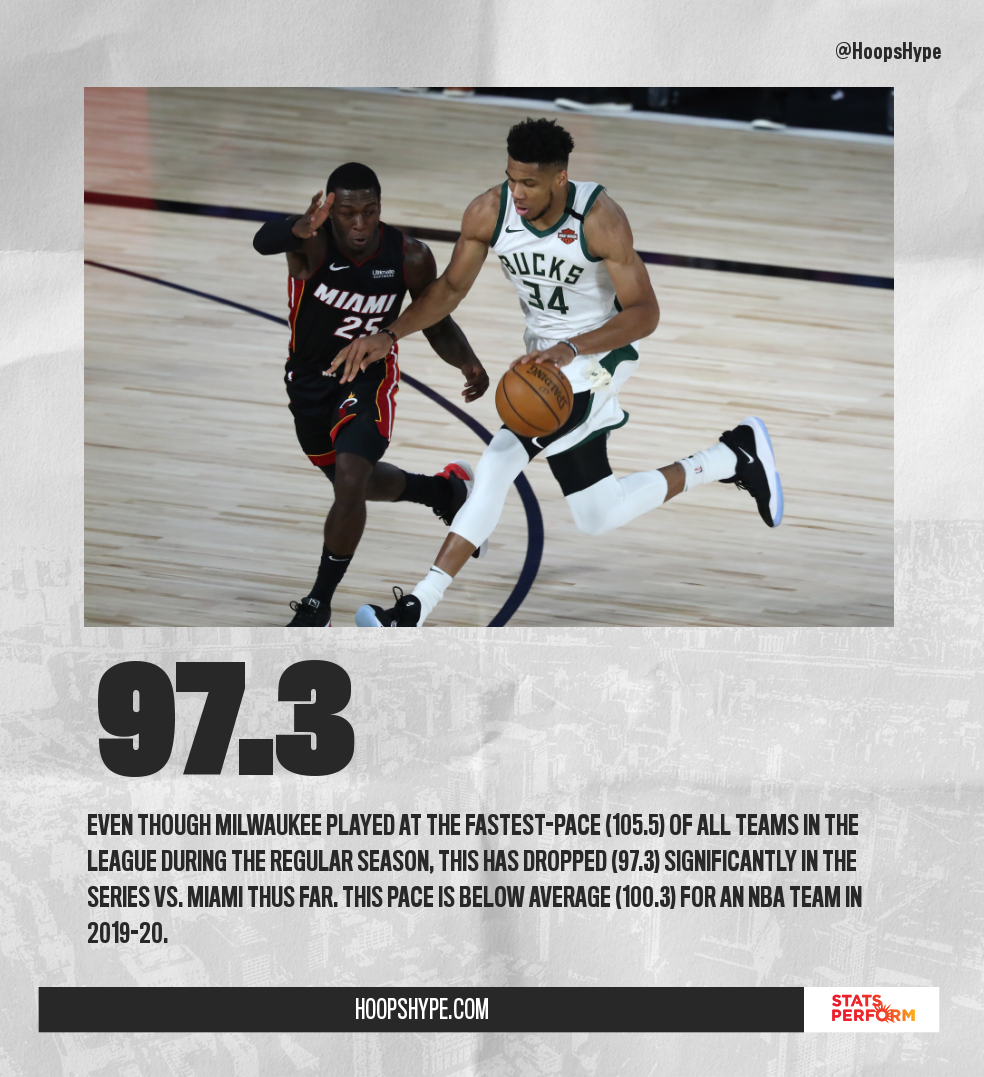 Another element that forced Milwaukee to look completely different was the frequency at which they took shots from beyond the arc.

Only three teams took three-pointers more often than the Bucks did (39.4 percent) during the NBA regular season. One of the reasons this is so important to their offense is because when there are more defenders guarding the perimeter, there is inevitably more room for the reigning MVP to explode near the rim.

Meanwhile, when defenses collapse on to Antetokounmpo within five feet of the basket, shooters are left open for easy looks. The relationship is symbiotic and it is much harder for one to exist cohesively without the other.

The Bucks led the East with 30.4 field goal attempts from above the arc, defined as three-pointers excluding non-corner looks. But they were just 4-for-15 (26.7 percent) from this zone during the second game of the series.

Even though just NBA two allowed more 3-pointers (37.7) per game than the Heat did in the regular season, Miami has consistently done a phenomenal job defending jump shots off the catch. In fact, the Heat recorded the second-most efficient defense (1.03 PPP) in the East when guarding catch-and-shoot jumpers in the regular season.

It will be challenging for Milwaukee to come back from a 3-1 deficit to help save their season, especially with Antetokounmpo struggling health-wise. But for them to have any chance of doing such, they will need to pick up the pace and create more opportunities from beyond the arc.