Nate Diaz stood in the octagon on Dec. 19, 2015, and listened patiently as UFC commentator Joe Rogan asked him to describe his feelings after beating Michael Johnson via unanimous decision at UFC on FOX 17 in Orlando, Fla.

“(Expletive) that,” Diaz replied, grabbing for the microphone and looking directly into the camera so that he might address his true audience, a fellow by the name of Conor McGregor.

For fans watching live on FOX in the U.S., where certain words simply aren’t allowed on television, the rant that followed was more beeps than words. But still, Diaz got his point across.

He was upset at McGregor. He thought McGregor might be reaping the rewards of other people’s hard work. He would like to face him in a professional prizefighting contest, please. It was his considered opinion that this contest would be more profitable for both parties than all other alternatives. And so forth.

The powers that be must have felt he made a compelling, eloquent case, because less than three months later Diaz would get that fight he asked for at UFC 196 in Las Vegas. This would lead a couple of the biggest nights in UFC history. And it all started with most Diazian of responses: “(Expletive) that.”

Granted, it wasn’t a direct line from Diaz’s callout to the granting of his wish. Then, as now, calling out the newly minted UFC featherweight champ McGregor was a pretty popular career move. It just didn’t typically go anywhere, since McGregor had his own ideas about his career trajectory, not to mention an uncanny ability to bend reality to meet his desires.

And McGregor? He was clear about what he wanted after a 13-second knockout of Jose Aldo at UFC 194. His plan, he told the world immediately after the fight, was to go straight up to lightweight to claim that belt as well. 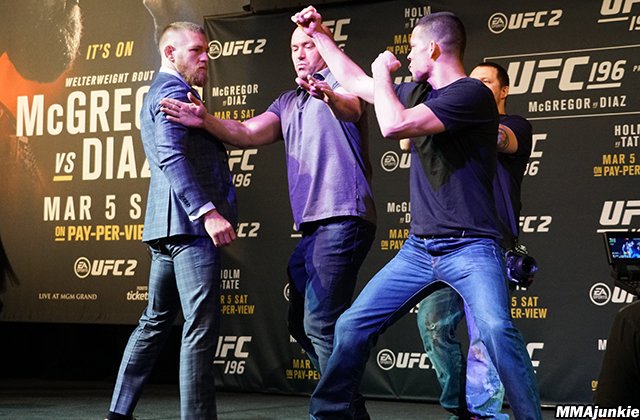 Rafael dos Anjos, who successfully defended his 155-pound title against Donald Cerrone a week later, was open to the idea. While he told McGregor it was “better to stay in the featherweight division,” he readily agreed to the pairing. And why wouldn’t he? Like McGregor had promised during one notable earlier exchange, a fight with the Irish superstar was a guaranteed box office hit, not to mention a potential “red panty night” back at home.

But with the bout set for early March, things hit a snag in late February. It seemed dos Anjos had injured his foot in training. He was out of the fight, ruining McGregor’s plans for an epic champ-versus-champ showdown, and it was all happening roughly two weeks before the event. After everything he went through trying to get in the same cage with Aldo, it must have felt like deja vu all over again.

Fortunately, there was no shortage of volunteers to replace dos Anjos. Several names from different weight classes emerged as possibilities. Even the former featherweight champ Aldo was discussed as a possibility. But then, none of them had very recently been seen on network TV calling McGregor everything but a child of God.

UFC President Dana White later would claim Diaz was training for a triathlon when he got the call to fight McGregor. Diaz, however, disputed that claim, and in fact later posted video evidence that seemed to suggest he was, as he claimed, “on a yacht in (Cabo San Lucas, Mexico) getting my chillax on” with friends and teammates. According to the video, that process entailed at least a little bit of tequila.

Still, Diaz accepted the fight at welterweight, which McGregor would later claim as his suggestion once Diaz pushed back on the idea of making the cut to lightweight on such short notice.

At a UFC gym in Torrance, Calif., in late February the two made their first public appearance to promote the bout. Foregoing his usual three-piece suits in favor of a grey tank top, McGregor expressed an admiration for the Diaz brothers – even the one he was about to fight. 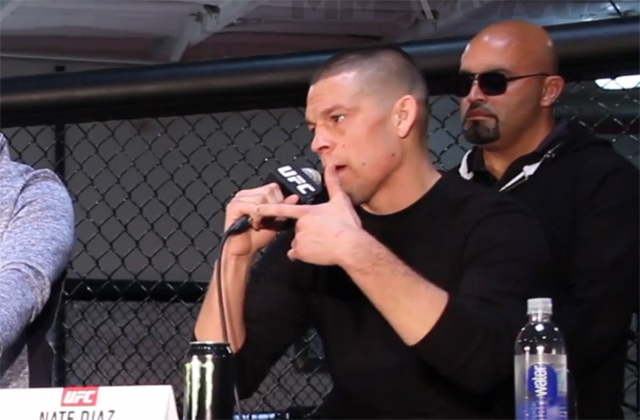 “I honestly like Nick’s little brother,” McGregor said. “How can you not like him? He’s like a little cholo gangster from the hood. But at the same time he coaches kids jiu-jitsu on a Sunday morning and goes on bike rides with the elderly. He makes gun signs with the right hand, and animal balloons with the left hand. You’re a credit to the community.”

Diaz, draped in a long-sleeve black shirt and jeans, replied in kind.

And with that, the tone was pretty much set.

On paper, the pairing didn’t seem so spectacular. McGregor was the instant sensation up from a lower weight class. Diaz was a former lightweight contender and occasional middling welterweight who seemed to have settled into the middle of the pack as a free TV fighter who, if nothing else, was always fun to watch.

As a replacement for a superfight, it felt decidedly like what it was: a creative but still somewhat desperate back-up plan.

Still, it was the interplay of personalities that promised to make this fun. McGregor touted his fame, his drawing power, his commitment to elevating the game as a well-dressed international superstar with the power to change these bums’ lives just by letting them share the same cage with him for a night.

Diaz? Yeah, he didn’t play that.

“I don’t care if it’s all good or not all good,” he said in an interview a couple weeks before the bout. “When we fight, we’re going to fight – fight fight, for real fight. He thinks he’s a ninja? I’m the ninja. Ninja Gaiden, American Ninja, real mother(expletive) ninja. This ninja martial artist right here, I started that (expletive).”

At the press conference during fight week, the two nearly came to blows after McGregor swatted Diaz’s clenched fist out of the way, prompting Diaz’s entourage to rush the stage and give security a scare.

In an effort to get maximum exposure in the days leading up to the fight, the UFC booked the fighters anywhere it could, including a strange appearance on CNBC, which required host Jane Wells to begin by explaining that she was “going to talk about money, because we are the business network.”

“I’ll take over from here, Nate,” McGregor shot back. “You can bounce.”

Diaz got visibly uncomfortable as Wells attempted to ask him about his finances and his payout for the fight.

“Who gives a (expletive)?” Diaz mumbled, almost to himself. “What is this, the money channel?”

Then finally, on March 5, 2016, it was go time. McGregor entered as a 4-1 favorite in the bout, but as he walked to the cage in the MGM Grand Garden Arena that night, the UFC commentator Rogan made what would prove to be a prescient observation.

If McGregor was concerned, you couldn’t tell. He entered the cage and walked immediately to the center, posing with his arms stretched wide as Diaz paced in his corner with an even more ferocious version his usual scowl. When referee Herb Dean brought them together for the pre-fight instructions, both men were too busy jawing at one another to listen.

McGregor would continue that strategy throughout the first round, talking to Diaz as he slipped and threw. While Diaz circled on the outside, McGregor charged in behind his powerful left hand, tossing off overhands and uppercuts and spinning kicks like he was already picturing the highlights in his head.

Diaz, on the other hand, stayed patient, even as the damage began to show. As McGregor found his range with the left in the latter half of the opening round, blood started to trickle from a cut around Diaz’s right eye.

Diaz briefly took McGregor down off a kick in the final minute, only to be swept and end the round on bottom up against the fence, essentially solidifying the first round for the heavy favorite McGregor.

McGregor continued pushing the pace to start the second, firing off three more spinning kicks in the opening minute while taunting Diaz nearly every time the left hand landed.

But then, subtle hints of a shift. After a particularly busy blitz by McGregor, Diaz came back with a stiff jab. Later, a trademark “Stockton slap” from Diaz. McGregor loaded up on a left and missed. Little by little, he seemed to be slowing.

Then halfway through the second round Diaz caught McGregor leaning off to his left and tagged him with a two-punch combination, ending on a sharp left hand that knocked McGregor back onto his heels. Diaz came forward behind another combination, and now it was McGregor moving backwards for the first time.

Soon Diaz was suffocating him in the clinch, firing off short punches and knees while his blood nearly drenched McGregor’s torso. When they moved back out into space, Diaz landed the same one-two, stinging an exhausted McGregor with the straight left.

That’s when McGregor did the last thing most people expected and shot in low for a takedown. Was it desperation? Was it fatigue? Was he just out of good ideas and tired of being hit in the face? Or did he somehow think it was in his best interests to take the bigger man with the better grappling pedigree to the mat?

Whatever it was, he soon had reason to question his own decisions, as Diaz locked on a guillotine and then blocked McGregor’s attempt to circle into side control. With control of his neck, Diaz used the choke to flip McGregor to his back before moving to full mount and firing off just enough punches to convince McGregor to roll to his belly.

As soon as he exposed his back, Diaz slipped one arm under his chin and squeezed for the choke. McGregor made no attempt to defend the submission before reaching up and tapping out in the final minute of the second round. After all the sound and fury, McGregor’s first loss in the UFC came via that subtly meek gesture of surrender.

“I hope Conor McGregor stays offline for a couple of days,” Rogan said on the broadcast soon afterward.

As for Diaz, he soon found himself right back where he’d been a few months earlier after the win over Johnson, this time being asked to describe his feelings upon beating the much-hyped McGregor.

There hardly seemed to be anything else that needed to be said.

By the time the receipts were all totaled up, the event pulled in more than $8 million at the gate, plus a reported 1.3 million pay-per-view buys, making it one of the biggest UFC events of the modern era. The two would eclipse that mark with a rematch that August, drawing more than 1.6 million buys just five months later.

But while McGregor’s rivals and detractors were quick to jump on his loss with memes and gloating tweets, McGregor himself was dignified in defeat.

Showing up to the post-fight press conference in a crisp blue suit, McGregor admitted that he’d been “inefficient with my energy.” He made mistakes, he told reporters. But he wasn’t running and hiding from them, nor was he about to let his haters have the last laugh.

For complete coverage of UFC 196, check out the UFC Events section of the site.

“Today in MMA History” is an MMAjunkie series created in association with MMA History Today, the social media outlet dedicated to reliving “a daily journey through our sport’s history.”