Although his name doesn’t often get brought up when discussing the league’s top superstars, Jimmy Butler is doing his best to change that this postseason.

Recently, we researched every player’s Global Rating* score for each game of the campaign (both regular season and playoffs included) to see how often their Global Rating was between 80 percent to 120 percent of their average score. This is a good way to get a barometer on each player’s level of consistency.

Well, when we were done, a familiar name sat at No. 1… Jimmy Butler. 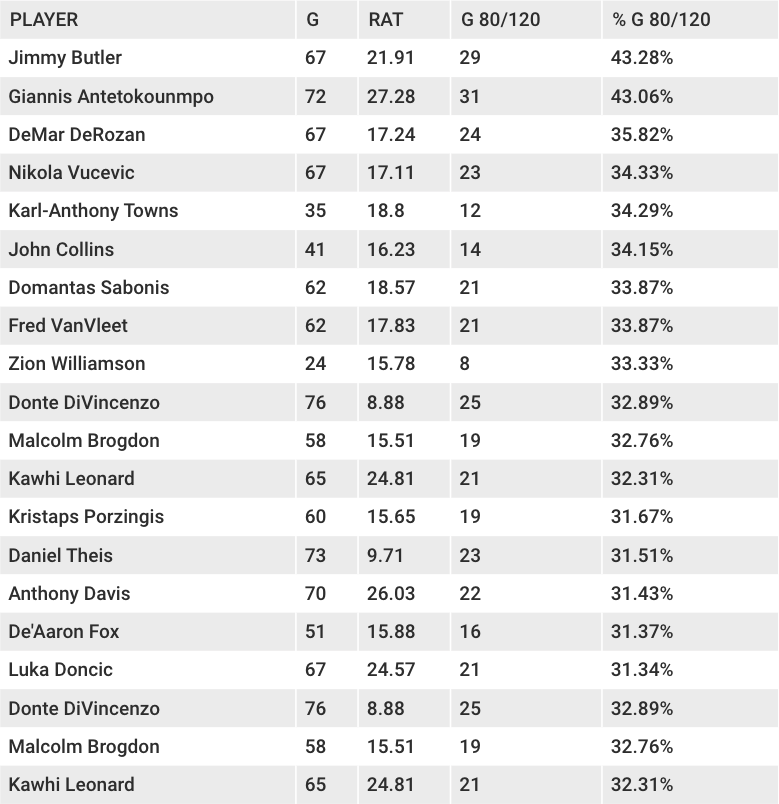 In 43.28 percent of Butler’s appearances for the Heat this campaign, the five-time All-Star had a Global Rating within 80 and 120 percent of his average score, which just goes to show the level of intensity and focus Butler brings every time he sets foot on the hardwood.

He may not be the strongest, fastest or bounciest player in the league, but you can without a doubt count on Butler to give full effort every night, no matter if it’s a vital postseason contest or a regular-season yawner in November.

Interestingly enough, the No. 2 finisher per our research is a superstar Butler just faced in the playoffs, Giannis Antetokounmpo.

Antetokounmpo may have flaws, namely, his complete lack of shooting ability, but there’s no doubt he plays with high intensity each and every outing, especially for a soon-to-be two-time league MVP. Once certain players have that many major accolades, it’s not surprising to see their effort defensively wane a bit.

The rest of the Top 5 is rounded out by DeMar DeRozan, Nikola Vucevic and Karl-Anthony Towns, reliable star-level players who are able to give you similar production every single night, particularly on the offensive side of the floor.

* Global Rating is an all-in-one statistic created by HoopsHype’s Alberto de Roa that takes into account not only the player’s production on the court but also his contribution to the overall performance of his team.