The incredible display put on between Jamal Murray and Donovan Mitchell in Round 1 of the 2020 NBA playoffs wound up being a historical one.

That’s because the ultra-talented duo combined for 475 points, the most scored by two opponents in a playoff series in NBA history.

Murray and Mitchell took the record away from Jerry West and John Havlicek, who, in fairness, had their own unbelievable shootout with slightly higher stakes at hand, in the 1969 Finals. The two Hall-of-Fame ball-handlers combined for 463 points in that series, 12 fewer than what Murray and Mitchell just put up.

The most recent duo to come close to Murray and Mitchell’s mark was Allen Iverson and Vince Carter, who went off for 449 combined points in the 2001 conference semifinals.

What’s craziest about Mitchell and Murray breaking the record is that they did so even with extremely subpar – by their heightened standards –  Game 7 performances, with the former scoring 22 points on 22 shot attempts and the latter producing pouring in merely 17 points on 21 attempts.

Had the tandem gone off yet again in Game 7, they would have left the previous all-time mark even further in the dust.

As is, Mitchell’s 254 points in the series were the best scoring mark for a player in a playoff series since 1977, when Abdul-Jabbar dropped 260 points in the conference semifinals. 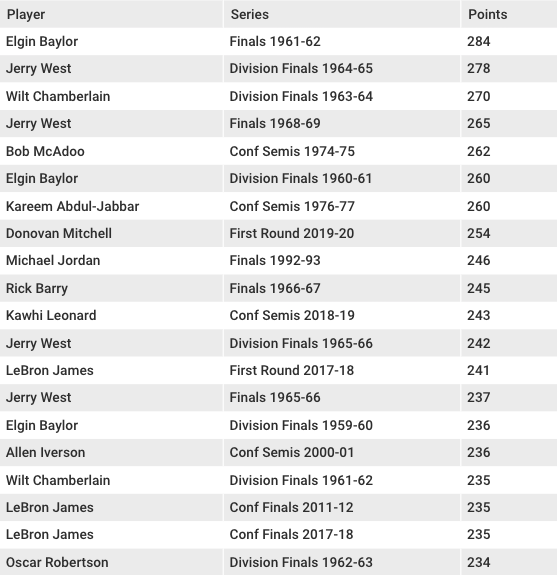 In the end, Mitchell and Murray will be linked forever for the otherwordly scoring displays they put on this year, with the Utah Jazz man scoring 57 points, 51 points and 44 points in three of his team’s playoff outings, and the Denver Nuggets guard putting up 50 points, 42 points and 50 points in three consecutive outings prior to Game 7. (That’s good for 47.3 points per game which he did on 64.2/62.9/88.9 shooting splits, for those keeping track at home.)

But it will be Murray who will be remembered more fondly, since it was his outrageous – and clutch – scoring that led Denver to a playoff series victory over Mitchell and Co., despite the Jazz holding a 3-1 series lead at one point.

Regardless, hat’s off to both gentlemen for the insane point-producing show they just gave us. It’ll be fun to see what Mitchell and Murray, both still just 23 years of age, have to show us in the future.