The 2018-19 Toronto Raptors team was seen as the unit that finally got that franchise over the hump, turning them from perennial playoff fodder into a champion, mostly thanks to the exploits of one Kawhi Leonard.

And once Leonard departed last summer for the Los Angeles Clippers, many believed the team would take a step back again, likely no longer in the sphere of contenders.

As it turns out, that couldn’t have been more wrong.

The Raptors finished the odd 2019-20 campaign with an outstanding 53-19 record and a 73.6 percent win rate, No. 2 in the East record-wise and No. 4 league-wide in net rating (plus-6.1). That win percentage is actually the best in their franchise’s history, even better than in their championship-winning 2018-19 when they finished the year with a 58-24 record and a 70.7 percent win rate.

In hindsight, we probably should have seen this coming from Toronto, as it’s not like they were only good that one year Leonard was on the team. In fact, the Raptors have such a rich recent history that looking back over the past five seasons, they’ve won more games than any other team in the league. 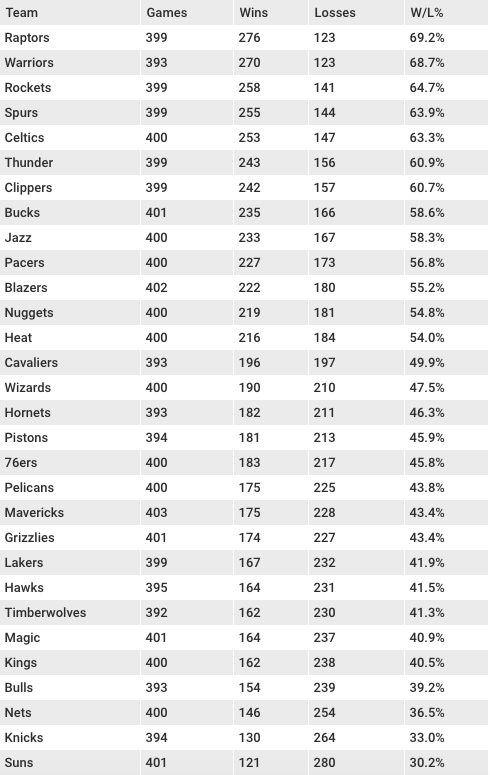 Toronto’s 276 wins over the last five seasons ranks No. 1 in the NBA, just ahead of the Golden State Warriors’ 270 victories and a good distance ahead of the third-place Houston Rockets (258), fourth-place San Antonio Spurs (255) and fifth-place Boston Celtics (253).

Overall, it’s been an extremely impressive run for Toronto recently, and this year, they have the chance to prove that they don’t need a Leonard-level talent to extend their winning to the playoffs, too.

Guys like Kyle Lowry, Pascal Siakam and Fred VanVleet have the chance to really cement their names in the history books with a good showing over the coming weeks.