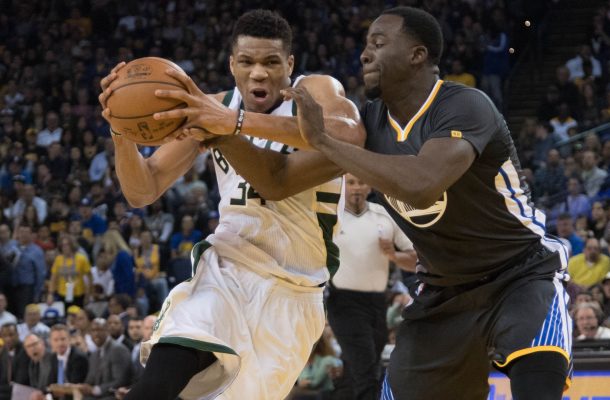 Who will the Golden State Warriors face in the NBA Finals? The Milwaukee Bucks won the first two games of the Eastern Conference finals, but the Toronto Raptors evened things up by taking both contests north of the border.

Ultimately, the Dubs' opponent is completely out of their control so there's no need to waste energy hoping for a specific matchup "I don’t really care who we play," Draymond Green told Mark Medina of the Bay Area News Group after the Warriors' Game 4 win in Portland on Monday night "Whichever team we play, it’s going to be a good battle” During the regular season, Draymond -- who was named to the All-Defensive Second Team on Wednesday -- did not play in the Warriors' 134-111 loss to the Bucks at Oracle Arena on Nov 8 He also missed Golden State's 105-95 victory in Milwaukee on Dec 7 That means the 2017 Defensive Player of the Year hasn't squared off against Giannis Antetokounmpo since March 29, 2018 “If that’s who I play, obviously you take that challenge on and you appreciate the challenge playing against a player who is as good as Giannis," Draymond told BANG

Draymond was not in uniform when the Dubs lost in Toronto on Nov.

29 (when Kevin Durant scored 51 points), and it was just his second game back after missing the prior 11 when Golden State got crushed at Oracle by the Kawhi Leonard-less Raptors on Dec 12 What happened during the regular season truly doesn't matter and the Warriors will have plenty of time to prepare for either opponent For now, Draymond is just enjoying the extended time off But you better believe he's looking forward to showcasing his talents on basketball's biggest stage “Draymond is a competitive guy He loves those type of matchups He’s the best defender in the league,” Kevon Looney told BANG “I feel way more comfortable with my defense when I got Draymond behind me "He takes our defense to another level" Why Raptors are better matchup for Warriors in NBA Finals than Bucks Why Raptors are better matchup for Warriors in NBA Finals than Bucks Giannis Antetokounmpo, or Kawhi Leonard? Khris Middleton, or Pascal Siakam? Brook Lopez, or Marc Gasol? Eric Bledsoe, or Kyle Lowry? The Warriors know they will face either the Bucks or Raptors for the 2019 NBA Championship, but as for which team presents the tougher matchup, it's a toss-up Just look at the current state of the Eastern Conference finals Milwaukee looked absolutely dominant, winning the first two games at home before the script flipped entirely in Games 3 and 4 in Toronto The result? A series that is now tied at two games apiece The Bucks and Raptors appear quite evenly matched, and it's anyone's guess as to who will ultimately prevail out of the East In making quick work of the Blazers in the Western Conference finals, the Warriors left themselves plenty of time to rest up before the Finals begin They'll have more than a week in between games, offering adequate time to ponder questions such as: which opponent would be a better matchup for Golden State? While the margin between the two teams is razor-thin, there's reason to believe the Warriors would match up slightly better with the Raptors than they would the Bucks

There were only two teams in the league that ranked in the top five in both offensive and defensive rating during the regular season: The Bucks and Raptors.

Milwaukee ranked marginally better than Toronto in both categories, and they've maintained their close correlation into the playoffs, where the Bucks and Raptors rank first and second, respectively, in defensive rating The Bucks, however, are averaging 1112 points per 100 possessions during postseason play -- fourth among all playoff teams -- compared to 1075 for the Raptors, which ranks ninth Still, those playoff numbers have to be taken with a grain of salt, as they've been accrued against different opponents The Bucks finished with the best record in the league during the regular season, so they had a somewhat easier path to the Eastern Conference finals than the Raptors did Milwaukee swept Detroit in the first round, and then after a brief hiccup in Game 1 against the Celtics, finished off Boston in five games Meanwhile, Toronto dropped their very first game of the playoffs to the Magic before eliminating Orlando in five games, and then only narrowly advanced to the Eastern Conference finals after perhaps the most dramatic game-winning shot in NBA playoff history in Game 7 against Philadelphia As such, the Raptors played three more games than the Bucks on their way to the conference finals, and are guaranteed to have played at least two more playoff games than Golden State should they meet in the Finals So, the Warriors would have a slightly larger collective "load" advantage against the Raptors than they would against the Bucks, but again, it's minimal

That said, the fact that Golden State will have nine days of rest before the Finals begin -- while the Eastern Conference representative could have as few as two, -- could exacerbate the Dubs' advantage.

[RELATED: Raptors tying series with Bucks furthers Dubs' advantage ] Both teams excel on both ends of the court.

Both are led by legitimate MVP candidates, two of the very best talents the game has to offer Both finished with better regular-season records than the Warriors, so both would have homecourt advantage over Golden State So why the Raptors? As we know, rotations shorten in the playoffs and typically more so the deeper in postseason play The Warriors had the luxury of extending their rotation against the inferior Blazers, but that won't be the same case against either the Bucks or RaptorsAnd the Bucks' shortened rotation appears slightly more threatening to Golden State than the Raptors' Milwaukee likely would trot out a nine-man main rotation for the Finals, whereas it might be difficult for Toronto to find that many playable guys in a series against Golden State Of those nine Bucks players, more than half of them shot better than 35 percent from 3-point range The Raptors have only four such players on their entire roster Two of the Bucks players that fell short of that 35-percent plateau are Antetokounmpo and Bledsoe, who -- aside from being extremely proficient interior scorers -- were both named to the NBA All-Defensive First Team on Wednesday Leonard was the Raptors' sole representative on either of the all-defensive teams, joining Golden State's Draymond Green and Klay Thompson on the Second Team

It's not a big difference, but at this point in the postseason, that makes plenty of sense.

The best teams are supposed to advance, and clearly, they have Whichever team comes out of the East will certainly pose more problems for Golden State than the Blazers did

The Raptors might be a slightly better matchup for the Warriors, but if you think the Dubs are going to waltz to their third consecutive league title, you're kidding yourself.

If he could choose his ultimate starting five, though, he'd only have one Warrior "Whew, it's a tough decision for the 3 I don't know if I'd pick KD or Bron," Morant said on the latest episode of Take it There with Taylor Rooks "Probably KD Because Bron, but I feel like I can be that facilitator for this team" KD or Bron at the 3? @igotgame_12 names his dream starting lineup 👀Ja Morant on calling himself “Point God,” modeling his game after Russ and playing with Zion in AAU on a new “Take It There” with @TaylorRooks https://tco/OcnUeQNcDv pictwittercom/HW6q95ffcm [RELATED: KD continues feud with Broussard ] Morant rounded out his lineup with himself as the point guard, Paul George at shooting guard, Giannis Antetokounmpo at power forward, and Anthony Davis at center Morant averaged 245 points, 10 assists and 57 rebounds per game as a sophomore this season for Murray State