Home / NBA / Yeah, Kevin Durant Has Issues, But Golden State Warriors Are Blessed To Have Him

Yeah, Kevin Durant Has Issues, But Golden State Warriors Are Blessed To Have Him 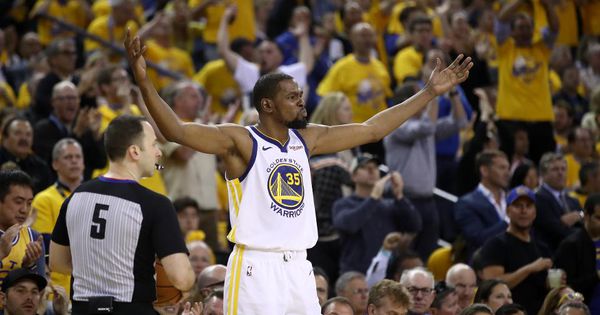 He doesn't deserve most of this bashing, and neither do his Golden State Warriors Yes, the Warriors will capture their third consecutive NBA title and fourth in five years with Durant likely spending the next few weeks watching from afar with his damaged calf and otherworldly skills

Yes, Durant had that ugly spat during a game last November with Green that led to a one-game suspension for the guy not nicknamed "KD

Ask your a verage NBA official, especially Zach Zarba, who Durant referred to as, well, this is a family site

He also shunned the media ("I don't trust none of y'all") for more than a week in February, and he has spent the last few days feuding with Fox TV analyst Chris Broussard over whether they've been the social media version of pen pals .

None of those things mean Durant was wrong during the summer of 2016, when KD/Golden State haters surfaced everywhere after he left the Seattle SuperSonics/Oklahoma City Thunder following nine seasons to sign a $543 million deal with the Warriors Good for Durant and great for the Warriors Don't forget A few weeks before the Warriors acquired Durant, they failed to defend their NBA title against a Cleveland Cavaliers team inspired by LeBron James, the game's premier player

So if you're the Warriors, you look to get even stronger.

You get Durant You also get DeMarcus Cousins, a perennial All-Star center who hasn't played much for the Warriors this season (Achilles tendon, calf) since he signed before this season This is more about Durant than anybody else With the freakishly versatile 6-foot-9 swing man winning back-to-back NBA Finals Most Valuable Player, the Warriors took the next two world championships Then he signed another two-year contract with the team last summer, and that one was worth $615 million along the way to the Big One Durant can become a free agent again after this season

If so, he'd have the option of going elsewhere for as much as $164 million over four years, or he could return to the Warriors for a five-year supermax contract worth $221 million for five years .

He's staying with the Warriors

Well, he should, but only if he loves money.

He already sacrificed $947 million when he didn't return to the Thunder for their supermax offer This time, he'd lose $57 million And I hear what the haters are saying: Courtesy of his spat with Green, he isn't the people's choice in the Warriors' locker room

" It's funny because when the stuff happened with Kevin earlier this year, he said, like, 'Everybody is giving you this pass like, Oh, that's just Draymond.

He's emotional,' " Green told The Athletic earlier this month "But (Durant) said to me then, like, 'You're not emotional I've seen you lock in and not say a word to the referees I'm not giving you that pass' That's kind of stuck with me" Sounds like Green wants Durant back, and you know Warriors officials do If they wish to continue as the NBA's greatest dynasty since the Bill Russell Celtics of the 1960s, they also need to re-sign stellar guard Thompson, who can become an unrestricted free agent this summer OAKLAND, CA - SEPTEMBER 24: (L-R) Kevin Durant #35, Draymond Green #23, Stephen Curry #30, Klay Thompson #11, and DeMarcus Cousins #0 of the Golden State Warriors pose for a group picture during the Golden State Warriors media day on September 24, 2018 in Oakland, California (Photo by Ezra Shaw/Getty Images) Getty "The season is still ongoing," Warriors owner Joe Lacob told The Athletic "We are not finished I have no new ideas or data for you We love Klay and KD and intend to attempt to re-sign them Period I am confident about BOTH of them But it is their choice to do what is best for them They have earned that right Our goal is to keep our team together We are pretty good" No question there for the Warriors, and that's with or without Durant But here's the point: If you're the Warriors, and if you've got Russell and gang on your mind, and if you already have a bunch of the world's best players, and if you have a chance to keep signing them, why not? Why not, indeed?