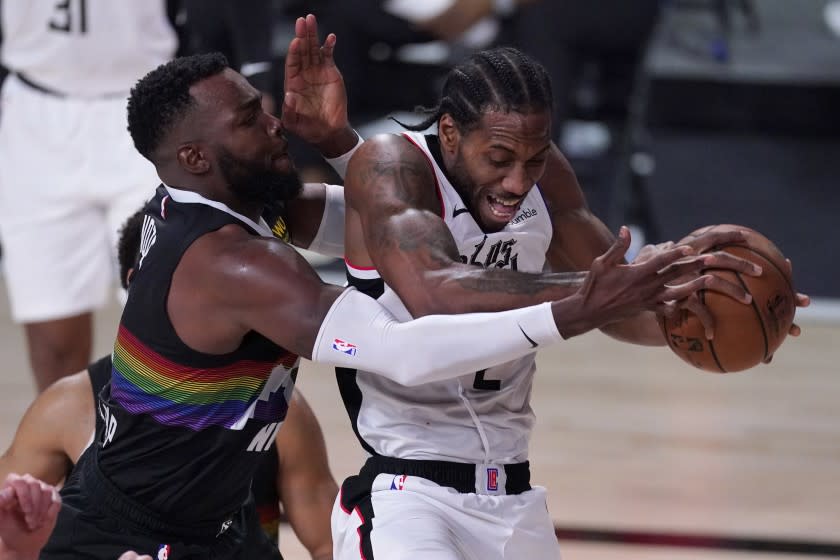 Kawhi Leonard’s eyes focused on the rim while the Denver defense converged around him. He pump faked once. Then again. Then again.

And finally, when the opening was at its smallest, he put the ball up and scored.

Patience and calm — they’re the trademarks for the Clippers’ best player.

Paul George, one of the league’s more amicable stars, has embraced it too.

The Clippers are on the cusp of another historical collapse, another 3-1 lead blown thanks to another blown double-digit lead. But if the gravity of living up to everyone’s worst expectations is too great for the Clippers, they’re not saying it.

“It’s positive,” George said of the postgame locker room mood. “This group’s staying together. We still in the driver seat. It’s not a panic mode.

With their season set to expire after their next 48 minutes, the Clippers have to somehow keep doing what they’ve been doing in the first half while exorcising whatever it is that’s causing them to play the way they have in the last two second halves.

After the game, coach Doc Rivers said he’d need to watch the game again before making any judgments, encouraging people to not look at numbers such as Montrezl Harrell’s minus-19 rating in the 15 minutes he played.

“Trez is up-and-down for us right now. We know that,” Rivers said. “Listen, if you go on just plus-minus, which I think a lot of people do, I don’t think either one of our [centers] were effective tonight if you want to be honest. And so we have to get better play out of both of them. …So just watch it first before we make that critique.”

Rivers is right — neither center was particularly effective, but it’s clear that Harrell was worse than Ivica Zubac, that Zubac’s one-for-six shooting entirely around the basket didn’t hurt the Clippers as much as Harrell’s all-around struggles.

The same can be said for Patrick Beverley, who was neither calm nor patient Sunday, fouling out after just 18 minutes, hamstringing the Clippers’ rotations by taking an All-Defensive second team guard out of action.

Marcus Morris Sr., who honestly pointed out the Clippers look better on paper at times Saturday after the team’s film session, was one-for-five and not a factor on offense. Same goes for Landry Shamet, who scored just one point.

Lou Williams scored 14 points, but he also missed three layups. JaMychal Green gave the Clippers a big spark in the first half, but only two of his 11 points came after halftime.

The Clippers maintain that as the pressure has gone up, that they haven’t tightened, an assessment that just hasn’t checked out with the Clippers unable to slam the door for the second straight game. They’ve blamed things like a lack of pace and not a lack of mental fortitude.

“It’s pressure every game,” Leonard said. “Obviously, no one wants to go home, but just got to go out there, play your game and just live with the results.”

Leonard has two rings — his approach has worked and there’s little reason to question it. But what about the other Clippers?

Before the game, Denver coach Michael Malone said that his team has fought off five-straight elimination games inside the bubble because they’re “comfortable being uncomfortable.”

Can Rivers say the same?

“When you decide to be a coach, it’s not going to be roses every day. So we clearly have the right formula as far as how we’re playing. And then we keep losing it.”

And, no matter how calm or patient Leonard and George are, they better figure out how to hang on to it.